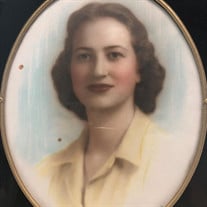 Maryanne Staton | February 15, 1923 – May 30, 2021 Maryanne Kennedy Staton, assistant dean and professor emeritus of home economics at Oregon State University, passed away on May 30, 2021 at the age of 98 surrounded by her loving and devoted family. Maryanne was born in Boise, Idaho on February 15, 1923 to Frank and Mary Kennedy, the youngest of their four children by nine years. She graduated from Boise High School, attended Boise Junior College and Cornell University. She earned B.A. and B.S. degrees in 1949 and a M.S. degree in 1950 from Oregon State College. Her love of the outdoors began in childhood, as she accompanied her father, a mining engineer, on exploration trips to remote areas of Idaho. Her father also introduced her to her husband-to-be, Warren Staton, while she was attending University of Puerto Rico, later jokingly referred to as an “arranged marriage.” Warren was working as a carpenter’s first mate in the U.S. Navy Seabees training in Puerto Rico, on Vieques Island. Maryanne and Warren were married July 11, 1943 in Boise. The Statons’ love of adventure and travel took them from camping on the backroads of Idaho to a bicycling trip through Europe in 1949, where they lived for 5 years. Daughter Laurie was born in Heidelberg, Germany; daughter Clare was born in Corvallis. Maryanne and Warren enjoyed traveling to Europe in their retirement as well as spending time at the cabin near Sisters, Oregon, that they designed and built. They continued camping, fishing and hiking well into their retirement. Maryanne was a pioneer in her career as a professor and community leader. She strongly believed in opportunities for choice and continuing education for women. She was a charter member of the National Organization for Women, founded in 1966, and was active in many church and civic organizations including Phi Kappa Phi, Delta Delta Delta and national honor society, Omicron Nu. She served as President of the Corvallis Public Library Board of Trustees and membership Committee Chair for Corvallis Arts Center. She also served as an education consultant on the Governor’s Committee on the Status of Women. She was truly decades ahead of her time. Maryanne is survived by her daughters, Laurie Staton and Ian Rothfels, of Salt Lake City, Utah, and Clare Staton and Greg Smith, of Corvallis; grandchildren Adam Smith, Laurel Darkins and Lily Smith; great-grandson Oliver Smith; nephews Cy Butterfield and Robert Warren Staton; and nieces Syd Yamanaka, Susie Schmidt and Anne Schroeder. A memorial service will be held at Church of the Good Samaritan, 333 N.W. 35th Street on Friday June 11 at 3:00pm.

Maryanne Staton | February 15, 1923 &#8211; May 30, 2021 Maryanne Kennedy Staton, assistant dean and professor emeritus of home economics at Oregon State University, passed away on May 30, 2021 at the age of 98 surrounded by her loving and... View Obituary & Service Information

The family of Maryanne Kennedy Staton created this Life Tributes page to make it easy to share your memories.