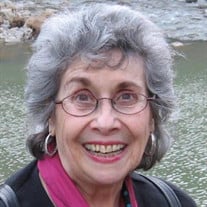 Mary Haunold (née Bacchi), age 87, died peacefully on February 21, 2021. She was born in New York City and grew up in an Italian neighborhood in East Harlem, NY. Her parents, Camillo ("Tom") and Frances Bacchi (née Astuto) came to the U.S. from Sicily, Italy, as children in the early 1900s. All of Mary's educational experiences were in New York City, where she graduated from Hunter College, an elite all-women college at that time. After graduating with a Bachelor's degree in Psychology in January 1955, Mary accepted a job as a laboratory technician at the Columbia University Eye Institute, where she worked until 1959. That year, she married Dr. Alfred (Al) Haunold, a research scientist at the University of Nebraska, whom Mary had met years earlier through a mutual friend. Their nearly-five-year, long-distance courtship culminated in marriage at Holy Rosary Catholic Church, Mary's home parish in East Harlem. The couple moved to Lincoln, Nebraska, where some of their children were born. Sadly, an infant boy died in 1963. They briefly moved to the Washington, DC area when Al accepted a job with the Smithsonian Institution. Another job offer from the U.S. Department of Agriculture took them to Corvallis, Oregon in 1965. Mary was a full-time homemaker who enjoyed a large number of activities and friendships until age-related problems forced her to slow down. She loved to sing, and performed in many musicals while at college, in Lincoln, and in Corvallis. Mary was an accomplished seamstress, creating many outfits for her children and herself. She enjoyed playing her violin in the Pro Musica Corvallis String Orchestra. Mary gave freely of her time, volunteering for many activities such as Stone Soup, Fish, and St. Mary's Catholic Church Choir for many years. Health problems and increasing cognitive difficulties mandated care at Willamette Springs Memory Care and from Lumina Hospice until her passing. Mary was beloved by all who knew her. She was gracious, kind, giving, compassionate, wise, colorful, artistic, funny, an exceptional cook, and humble beyond measure. She had a smile that would light up a room. Mary is survived by Al, her husband of 62 years, and by her children Chris (Jill) of Boise, Idaho; Monica Harbolt (Jim) of Tigard, Oregon; Michelle Lorenz (Bill) of Elk Grove, California; Julie Catala (Reynold) of Albany; Karl (Laurie) of San Jose, California; Erik (Jenn) of Corvallis; and Jennifer Pendergast (Joe) of Longmont, Colorado; as well as 13 grandchildren and three great-grandchildren. A funeral mass will be at 12 p.m. Tuesday, March 2 at St. Mary's Catholic Church in Corvallis. The service will be live streamed at https://tinyurl.com/MaryHaunold for those who are unable to attend in person. A private graveside interment will follow at St. Mary's Cemetery. Donations in Mary's name may be made to St. Mary's Catholic Church; the Center Against Rape and Domestic Violence; Jackson Street Youth Services; or Lumina Hospice - all in Corvallis.

Mary Haunold (née Bacchi), age 87, died peacefully on February 21, 2021. She was born in New York City and grew up in an Italian neighborhood in East Harlem, NY. Her parents, Camillo ("Tom") and Frances Bacchi (née Astuto) came to the U.S. from... View Obituary & Service Information

The family of Mary Frances Haunold created this Life Tributes page to make it easy to share your memories.