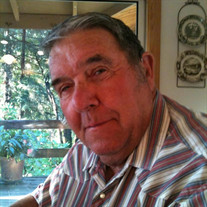 Melvin Marvin Martin September 25, 1933 – November 14, 2021 Marvin lost his courageous, 7 year battle with lung cancer Sunday morning, slipping quietly to sleep, no doubt dreaming about Elk hunting or riding a sturdy trail horse. Marvin was born in Buffalo, South Dakota to Walter and Grace (Derry) Martin. Marvin’s life started out as an adventure, born in the back seat of a Model T Ford, trying to get to the hospital. He was the fourth of five boys and 1 sister. Marvin’s dad was a heavy equipment operator and followed jobs all over the Northwest. This is what brought the family to the Hermiston, Oregon area. When the family moved on to the next job, Marvin, at the tender age of 15, stayed behind and went to work for a rancher who gave him room and board and made it possible for Marvin to finish high school. Once Marvin graduated from high school Uncle Sam came knocking, sending Marvin to Ft. Lewis for training in light infantry, heavy weapons and ranger school, and then on to Korea for the next 16 months. After returning to Oregon, Marvin went to work for a rancher near Echo, Or and soon after met his future wife Deloras Cresap. Though Marvin loved the life of a cowboy, he soon had two daughters (Christy Belling and Dianna Steinauer) and a wife to support. Wanting to provide more for his family, in 1966 Marvin took a job with OSU at the Swine Barns, and soon was able to move into the Feed Center Manager position, operating the OSU feed mill, which he held for 23 years. Towards the end of his 31 years in Animal Sciences at OSU, Marvin finished his career as the Assistant Beef Center Herdsman at the Campus Beef Center. In 1968 Marvin joined the Benton County Sherriff’s Posse and was still a member at the time of his passing. It was during his time with the Posse that Marvin became heavily involved with search and rescue. In 1977 the U.S. Border Patrol came to Oregon with a free class in “mantracking” and the Posse sent Marvin to attend. Marvin was so fascinated with the training involved and the prospect of being able to use these skills when on a search and rescue that it lead to a whole new career for Marvin. Marvin became a certified sign cutter, the highest level of expertise, and along with his partners, Universal Tracking Systems (UTS) was founded. With UTS, Marvin was able to travel all over the US and Canada teaching policemen, special forces soldiers and search and rescue groups how to read sign. Besides saving lives, Marvin also used these skills as an expert witness in criminal cases. Marvin had a love for life, animals and the outdoors. If you were ever lucky enough to go on a trail ride, hunting or camping trip with Marvin, you would have heard him singing as he bustled around cooking campfire biscuits or feeding horses. And Marvin had the best stories, keeping kids mesmerized and adults laughing. Dogs and kids would flock to Marvin, probably because Marvin was a big kid himself, and he always took the time to answer any questions kids might have. When spending time with Marvin, he most likely brought out the Cribbage board and challenged you to a game or two, which he probably won. Marvin was preceded in death by his parents, 4 siblings and his daughter Christy (Martin) Belling. He is survived by his ex-wife Deloras Cresap, his brother Owen Martin, his daughter Dianna (Martin) Steinauer and her husband Mark, four grandchildren Brandy (Belling) Reishus and her husband Brandon, Morgan Belling, Shelby (Steinauer) Taylor and her husband Travis, and Collin Steinauer, along with lots of nieces and nephews and the special friends that touched his life. How do you sum up 88 years for someone who lived such an adventurous life and was very loved by his family and friends, I hope I did my dad justice in this small tribute and I will miss him until I see him again, not too soon though! Marvin requested no service, but instead wanted his family to spread his ashes in private.

The family of Marvin M. Martin created this Life Tributes page to make it easy to share your memories.