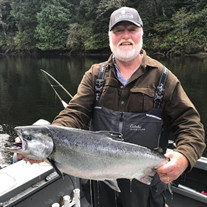 On Wednesday, August 4, 2021, Mark Arkills, loving husband, father, and Papa passed on unexpectedly at the age of 57. Mark Bradley Arkills was born on July 16, 1964, to Dick and Deanna Arkills in Seattle, WA. When he was seven, Mark’s family moved to Hermiston, OR. As a student at Hermiston High School, Mark was active in DECA, wrestling, football, and Honor Society. Mark continued playing football at Eastern Washington University until injuries led to a decision to give up the game he loved. He transferred to Blue Mountain Community College for a year to earn his Associate’s degree, then transferred to Oregon State University where he earned his bachelor’s degree in business and economics. While at OSU, Mark began his career at Holiday Tree Farm. For 35+ years, Mark’s commitment and loyalty to Holiday Tree Farm was unprecedented. During this time he also served on the Pacific Northwest Christmas Tree Association Board of Directors, including as President, the Oregon Christmas Tree Licensing Committee, and various other committees. In 2017, Mark was the recipient of the Herb & Helen Plumb Award for his outstanding contributions to the Christmas tree industry. This award is the highest honor bestowed to a member. In 1997, Mark married Debbie Kaping. They spent the next 24 years doing what they loved: fishing, camping and attending athletic competitions with their three grandchildren. Mark was a generous, kind, gentle giant and was deeply loved by those who knew him. Mark is survived by his wife Debbie, daughter Christy Weinhold (s. Brian), three grandchildren Cailee, Luke, and Alec; parents Dick and Deanna Arkills, brothers Tim (s. Della), and Dave (s. Shari); and sister Deanne Balland (s. Paul), as well as numerous nieces and nephews. In Lieu of Flowers,contributions may be made to the Herb & Peggy Ballard Memorial Scholarship Fund Via- Benton Community Foundations at PO Box 911 Corvallis OR. 97339 or the PNWCTA Barney Douglas Research Fund. PO Box 660 Molalla, OR 97038

On Wednesday, August 4, 2021, Mark Arkills, loving husband, father, and Papa passed on unexpectedly at the age of 57. Mark Bradley Arkills was born on July 16, 1964, to Dick and Deanna Arkills in Seattle, WA. When he was seven, Mark&#8217;s... View Obituary & Service Information

The family of Mark Bradley Arkills created this Life Tributes page to make it easy to share your memories.