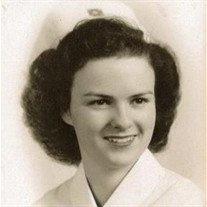 Marion Dale Barnecott Corvallis, OR Marion Dale (Hewson) Barnecott, wife, mother, grandmother, sister and friend, passed away peacefully at Good Samaritan Hospital on the evening of November 30, 2018. She would have celebrated her 95th birthday on December 23, 2018. Dale, as she was known by, was born in Pasadena, California, to George Ellis Hewson and Hattie English Hewson, and grew up in the LA area. They settled in Westwood, CA where she attended high school, and went on to UCLA for 2 years where she joined the Alpha Phi Sorority, then transferring to Bishop Johnson College of Nursing in the Cadet Nurse Corps at Good Samaritan Hospital in LA. By the time she graduated as a Registered Nurse, World War II was over and her “very handsome air cadet”, Frank Barnecott, returned from service in the Aleutians. They were married in May, 1946. They moved to Bethlehem, PA so Frank could finish his degree at Leigh University. Shortly after, they moved to the San Francisco, CA area for Franks work. They remained there for 12 years, raising their children. When the children were all in school, Dale returned to nursing in Palo Alto for several years. Then Frank got a job offer, this time across the country in Massachusetts. They packed up the 1954 Ford station wagon with the kids, a dog & cat and made the move, ending up in Norwell, MA from 1960 to 1978. Dale was one of the first nurses to work at the South Shore Medical Center in Norwell. In 1978 they moved to Colorado for a one year stint, then back to the east coast settling in Newport, RI where Frank was the general manager of the local newspaper, until they retired. In between all this, Dale & Frank did a lot of traveling to Bermuda, Europe, Canada, South America, and Africa. Again, moving across the country, they bought land and settled (for a time) in Philomath, OR, building their home & growing blue berries. Dale made wonderful friends through church and PEO. When Frank became ill with ALS, they sold the farm and moved into Corvallis, OR. When Frank passed away in 2001, Dale and son David moved into a new home they had built. Dale continued with her church work and her sisters in her PEO chapter, along with traveling across the USA by rail several times to visit daughter Susan and son John. Dale was quick to smile, and she never failed to see the positive in others. As a mother, she was nurse, counselor, tutor and friend. To her family and friends, she was always understanding and generous with her time and love. She will be missed. She is survived by her three children: Susan (Merlin) Ladd of Waquoit, MA, John (Deidre) of Longwood, FL, David of Corvallis, grandchildren Hope (Adam) Brill of FL and Trenton Barnecott of Longwood, FL. Besides her husband & love of her life, she was predeceased by her parents, her sister Barbara Howard and sister Patricia Walker. Memorial service will be at Good Samaritan Episcopal Church in Corvallis on January 18, 2019 at 11 am, followed by interment in the church’s columbarium, and a reception in the church’s parish hall. In lieu of flowers, for those who wish to make a donation in her name, please consider PEO Chapter FU, noting they are in memory of Dale Barnecott, and mailed to the treasurer at 3012 NW Snowberry Place, Corvallis, OR 97330.

The family of Marion Dale Barnecott created this Life Tributes page to make it easy to share your memories.