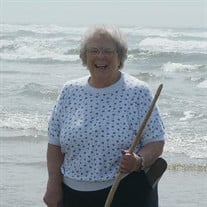 Margery Blanche Mix Birth: August 5, 1923 Death: April 8, 2019 It is with a mixture of sorrow and joy that we announce the passing of our mother, Margery Blanche (Franks) Mix, this past Monday, April 8, 2019, approximately 11:45 a.m. Still a fighter at 95 years, 8 months, and 3 days; doctors say it was mom’s heart which finally gave out. Mom was the third child born to David and Evelyn Franks on August 5, 1923, in Akron, Ohio. She graduated from North High school in 1941 and briefly attended a nursing program before enlisting in the United States Marine Corps. It was in a bar outside the USMC base in San Diego where she met and married our dad, Benjamin Richard Mix, on January 20, 1945. Post-World War II, mom and dad lived in Yachats, Oregon, for a time driving logging trucks until they moved back to Ohio where dad worked for the Pennsylvania Railroad and mom began her career at Goodyear Tire and Rubber Company. After dad’s death in 1972, mom was offered a professional transfer to Goodyear Aerospace outside Phoenix, Arizona, the first transfer of a female employee on her own merit. Mom continued to impress both superiors and co-workers alike; she was the first woman to be asked to join the at-the-time all-male Pioneer’s Club, a Goodyear Aerospace social/business group. After a long career, mom retired in 1985, living in Sun City, Arizona, for a time and travelling to the Oregon Coast each Spring. Eventually she returned to Yachats full time until she moved to Corvallis, Oregon, where she lived until her passing. Mom was kind, compassionate, loving, stubborn, funny, private, independent, warm … she loved the beach, Boston Terrier dogs, John Wayne, playing games and cards (Cribbage, Can’t Stop, Sh*t on your Neighbor), root beer, Mr. Goodbars and chocolate-covered cherries, liver and onions, macaroni and cheese, and pecan and pumpkin pies. Back in the day she could make a mean oatmeal raisin cookie and killer sloppy joes. She wasn’t so hot on trying new things but was talked into trying Thai food once if only because the main ingredient was noodles. In the end, she checked out of this life as she’d always intended: on her own terms, in her own time, and with supported (not assisted) independence. She was preceded in death by her parents, brother, infant sister, and husband; she is celebrated by her daughters, Joann Zimmer and Janet Mix; her son-in-law Tim Zimmer; granddaughters Cassandra Cleveland and Amanda Arnell; daughter-in-law Quantia Cleveland; great-grandson Benjamin Enle; many nieces and nephews; and many friends, including those at Samaritan Village in Corvallis. In lieu of flowers, donations could be made in her memory to the Samaritan Village House Committee.

Margery Blanche Mix Birth: August 5, 1923 Death: April 8, 2019 It is with a mixture of sorrow and joy that we announce the passing of our mother, Margery Blanche (Franks) Mix, this past Monday, April 8, 2019, approximately 11:45 a.m. Still... View Obituary & Service Information

The family of Margery Blanche Mix created this Life Tributes page to make it easy to share your memories.