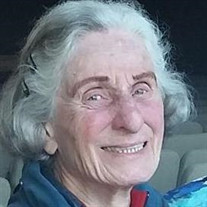 Margaret (Marge) Hales passed away at Corvallis Caring Place on November 7 following a short illness at the age of 95. She was born just outside Corvallis on Tampico Road, as were her brothers. Her father, Jacob Studach, emigrated from Switzerland to this area and later Rosa Steger also emigrated to marry Jacob. They had four children of which Margaret was the second child and only girl. A half-sister, Rosa, remained in Switzerland. When Margaret was five years old her father was killed in a logging accident. As her mother didn’t drive they moved into Corvallis where Margaret lived most of her life until her death. She worked at Kessler’s Ice Cream Parlor, the social hub of the town during the depression era, which is where she met I. Lewis “Tex” Hales. They married on January 11, 1941 and remained so for 41 years until his death in 1982. They had nine children — five boys and four girls. She married Edward Kelly of Missouri in 1993 but they divorced in 2001 and Margaret returned to Corvallis. Margaret had a warm, vivacious personality to which people gravitated and was much appreciated for her humor and the laughter she inspired in others. She loved music, dancing, traveling and, most of all, socializing with family and friends. Margaret always looked for and emphasized the best of character in everyone. When her husband became ill, she took employment at Good Samaritan Hospital for a few years and then went to work at Hewlett Packard. She was a devout Roman Catholic and, in earlier years, she and Tex participated and assisted in many parish activities at St. Mary’s Church. She was preceded in death by her parents; husband; brothers, John and Leo Studach; half-sister, Rosa Siegriest; infant son; daughter, Janice Gabriel; daughter-in-law, Diana Hales (Ray); son-in-law, William Jumbeck (Michelle); and grandson, Scott Villegas (Pam). Margaret is survived by her brother, Alfred Studach; sons, Raymond, Allen, Michael and Walter; daughters, Lorene (Nancy Haldeman), Pamela (Jim) Bellavance, Michelle Jumbeck (Mac McCaslin); 10 grandchildren; 17 great-grandchildren; one great-great-grandchild; and numerous nieces and nephews. She is also survived by Paul Hoffstadt, her good friend and social companion of many years with whom she shared travel adventures and on-going good times. A memorial service will be held at 11 a.m. on Friday, November 30, at St. Mary’s Catholic Church in Corvallis. It will be followed by a reception in the social hall.

Margaret (Marge) Hales passed away at Corvallis Caring Place on November 7 following a short illness at the age of 95. She was born just outside Corvallis on Tampico Road, as were her brothers. Her father, Jacob Studach, emigrated from Switzerland... View Obituary & Service Information

The family of Margaret Hales created this Life Tributes page to make it easy to share your memories.