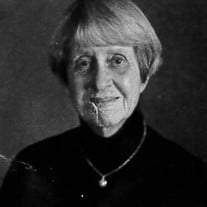 Lula Purvis Gray Clarke Lula Purvis Gray was born on April 26th 1924 into the loving arms of her parents William H. and Enid Taylor Gray. She knew a happy childhood in rural eastern North Carolina, with many friends, including her elder brother William with whom she would sneak out at night sometimes to dance the Jitterbug. It was said she could really turn a heel. In 1942, her Daddy took her to the Rose Bowl in Durham North Carolina where Duke was playing Oregon State. Oregon State? Lula cried bitterly when OSU beat Duke 20-16! In her final year in high school a teacher told the class that none of them would be true North Carolinians unless they had read Thomas Wolfe's Look Homeward Angel. As she was legally blind and failing over many months last year, she heard Wolfe's autobiographical novel in keeping with her book group of over 40 years. More than anything Lula loved reading. She had a years' long vocation of reading and writing and mentoring and talking about books. She was loved for her insight, wisdom and incredible memory that allowed her to analyze books to the interest of others. When she could no longer read she thankfully used tapes courtesy of the Oregon Braille Library. Lula graduated from Mary Washington College (University) in Fredericksburg, Virginia in 1946 with a degree Science. She spent some time teaching physics in Florida and working in a seed lab. She went on to Yale Divinity School where she majored in Christian Education. One day at the library, as she walked down a flight of stairs, she was met by a handsome Yankee with an eye for a good thing. Lula married Ronald O. Clarke on July 11, 1953 and he took her back west to a whole new culture. She spent the first 2 years of married life as a pastor's wife on the Oregon Coast in Nelscott (now a part of Lincoln City). At that time they also welcomed their first child, John. Then after a time in the Bay area where they had a second child, James and third child, Enid, Ron received his PHD and an assistant Professorship at Oregon State in the Religious Studies Department. The family moved to Corvallis in 1963. Also in 1963 Lula joined the First Presbyterian Church of Corvallis where she was a member for the rest of her life. She enjoyed taking many classes and joining groups including Centering Prayer Meditation, and going on retreats to the Benedictine monastery at Mount Angel. In the 1970's Lula went back to school at Western Oregon in Monmouth, and received her teacher's certificate. She became a substitute teacher and was popular with teachers in several schools, and her career was greatly satisfying to her. She made several trips abroad mostly to France to visit her son, John and his family. This was a joy for her. They went to many places, many regions and she has a picture book for most every trip of theirs! She also enjoyed visiting her second son, Jim who has been a United Methodist minister at various locations in Washington State. She was happy to have her last child, Enid at home in Corvallis. Her reputation as a foodie was well deserved, especially when it came to sweets. People in her neighborhood and from church pleased her greatly by offering her food and desserts. It was a thing. She had at least three people making sure she never ran out of cookies, and a gourmet cook right across the alley. She also loved her Meals on Wheels, which came in a little brown sack to open like a birthday present. She was a delightful person. Funny, smart and at times rather determined. She will be missed. Lula is survived by her son John (Francoise), son James (Paula) and Enid (Don), three grandsons, Hadrien, Fabien and Aaron, and by many nieces, nephews and cousins back in North Carolina. Also by Gita Shekhinah, our beloved dog. Preceding her in death, her husband Ronald O. Clarke, brother Aaron Gray, sister Nancy Winslow, and brother William H. Gray. Tragically, her grandson Kenneth James Clarke, 19, died in an automobile accident while he was a freshman at American University in Washington D. C. Lula mourned his passing deeply until the last days of her life. She died on a warm sunny afternoon while a handful of her many loved ones talked quietly amongst themselves. She passed peacefully, smiling. A service will be held at First Presbyterian Church on September 14, at 1:00.

Lula Purvis Gray Clarke Lula Purvis Gray was born on April 26th 1924 into the loving arms of her parents William H. and Enid Taylor Gray. She knew a happy childhood in rural eastern North Carolina, with many friends, including her elder brother... View Obituary & Service Information

The family of Lula Purvis Clarke created this Life Tributes page to make it easy to share your memories.