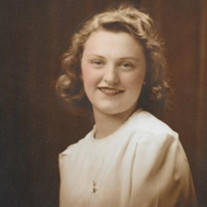 Lorraine Sophie (Fagan) Woelfle was born into this world on March 2, 1926 in Chicago, Illinois to John and Marion Fagan. The oldest of three children, she spent her early childhood days in the "Back of the Yard" neighborhood. Lorraine passed on to heaven August 22, 2021. She was raised a devout Catholic and carried her badge of faith openly and proudly her entire life. She attended various Catholic grade schools, graduating from 8th grade in 1940. That summer she met Don Woelfle, the boy would be her husband of 68 years. After Lorraine graduated from high school four years later, they were married in September in Oakland, California where Don was stationed in the Navy. The Navy moved them around often and their "adventures" were many in Oakland, Portland, Seattle, NAS Kwajalien and San Diego. 1960 found them at their final destination, Corvallis, Oregon. They first rented a big house on 29th street and then in 1962 buying the family home at 21st and Monroe. During the many moves of their Navy life, Lorraine gave birth to seven children at their various duty stations. Two more children were born in Corvallis. Lorraine loved Corvallis, a great place to raise their children. Don's final duty station was the NROTC Unit at Oregon State University where he retired from the service and the family remained in Corvallis. Lorraine's life in Corvallis centered around St. Mary's Catholic Church, being a mother and homemaker and a devoted wife. She was preceded in death by her husband Don, daughters Terese and Mary, brother Walter as well as her parents. Lorraine is survived by daughters Barbara, Sharon (Robin), Maureen, Paula (Paul), and Catherine (Pete); sons David (Kerri) and John (Nancy); 14 grandchildren, three step-grandchildren, nine great-grandchildren and her brother George (Mary) Fagan. Lorraine's family would like to thank Evergreen Hospice for the gentle guidance they provided to allow Lorraine to pass peacefully at home; to caregivers Cindy Alexander and Jen Wnuk who provided care and companionship to Lorraine at her home. Also, special thanks to Tom, Stephanie, and Lorraine at Rice's Pharmacy for their wonderful support and excellent service throughout these many years. In lieu of flowers, please donate to the St. Mary's food pantry. Viewing will be held at McHenry Funeral Home on September 1st, 2021, from 3-5 p.m. The celebration of Lorraine's life will be held at St. Mary's Catholic Church, Corvallis, on September 2nd, 2021, with rosary at 2:30 p.m. and funeral mass at 3 p.m.

Lorraine Sophie (Fagan) Woelfle was born into this world on March 2, 1926 in Chicago, Illinois to John and Marion Fagan. The oldest of three children, she spent her early childhood days in the "Back of the Yard" neighborhood. Lorraine passed... View Obituary & Service Information

The family of Lorraine Sophie Woelfle created this Life Tributes page to make it easy to share your memories.

Lorraine Sophie (Fagan) Woelfle was born into this world on March...