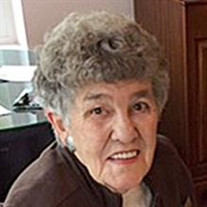 A memorial mass will be celebrated at 1:30 p.m., on Monday, November 12, 2018, at St. Mary Church in Corvallis, Oregon, for Loretta Dorothy Bruzda. Loretta was born in Detroit, Michigan, to Pauline (Szczepanski) and Travis Postelle Arie; Loretta was an only child, but between her father’s (6) and her mother’s (18) siblings she had an abundance of aunts, uncles, and cousins. She graduated from Northeastern High School, Detroit, Michigan, in 1947. Loretta met her lifelong love, Henry Joseph Bruzda later that year while ice skating on the River Rouge, and they married on April 24, 1948. Family meant everything to Loretta, and throughout her life she celebrated each person to whom she was niece, cousin, wife, mother, grandmother, and great grandmother (GG). Over the first thirty years of her marriage, Loretta concentrated on that family: she was known for her conscientious mothering, home-cooked meals, spotless home, love of crafts, ballroom dancing, and twelve years as a Girl Scout leader. But in 1982, Loretta decided on a career path and enrolled in the Conejo Vocational Nursing Program; she graduated top of her class LVN (licensed vocational nurse) in 1983, continued taking additional certifications in pharmacology and phlebotomy, and became a licensed nurse in California and Oregon. Loretta specialized in long-term nursing care, working at Pleasant Valley Hospital and Camarillo Convalescent Hospital in California for the first four years of her career, the middle of her career at the Corvallis Manor Nursing Home as charge nurse, and the last few years as night charge nurse at the Siuslaw Care Center in Florence, Oregon. By the time she retired, Loretta and her husband had begun life in the senior community of Florentine Estates in coastal Florence, Oregon. Loretta volunteered as the disaster preparedness officer for Florentine Estates, organizing both the people and supplies in conjunction with the city of Florence, Oregon. She also taught crafting classes in Florentine’s community center, and she fostered her love of sewing, playing cards or dominoes, and ball-room dancing. In 1998, Loretta and her husband celebrated their fiftieth wedding anniversary with a gala party at the Elks Club, followed by special recognition by the Emerald City Jazz Kings during a performance at the Florence Events Center, where they were invited to dance on stage to their song, “A String of Pearls”. Loretta moved back to Corvallis, Oregon, when her husband passed in 2005; they had been wed just shy of 57 years. Always adapting, Loretta entered the later phases of her life with fortitude and grace, becoming increasingly interested in community and relationships. She lived at Samaritan Village then Stoneybrook Lodge, making many true friends, continuing her keen interests in cards and games, crocheting scrubbies or hand towels, and learning new skills like watercolor painting. Loretta excelled at the Seniors-Helping-Seniors programs, and she assembled over six-thousand rosaries for missionaries sponsored by St. Mary Church in Corvallis. Loretta will be remembered for her curiosity, courage, integrity, persistence, wry humor, competitive spirit, and devotion to her faith, family, and friends. Survivors include her son Joseph Randall Bruzda (Kim Peterson); daughters Cynthia Bruzda Chapman (Raymond), Deborah Denise Frassetto (Eugene), and Carolyn Bruzda Rose; grandsons Andrew Chapman (Katharine), Anthony Frassetto (Laura), and Alexander Bruzda; granddaughters Gina Tallerino (Terry), Marina Chapman, Angela Best (Christopher), Kelsey Bruzda Price (Victor), Emily Welsh (James), Lauren Manning (Gabe), and Jennifer Lyman (Travis); five great grandsons, and eight great granddaughters. Loretta was predeceased by her parents and spouse, great granddaughter Alyssa, and twenty-four aunts and uncles. Through the Oregon State Parks Trust, a bench overlooking Heceta Churn, just below the Heceta Head Lighthouse, has been installed to remember Loretta and her spouse with their motto, “Love leads the way”. Please share thoughts and memories with the family at www.mchenryfuneralhome.com.

A memorial mass will be celebrated at 1:30 p.m., on Monday, November 12, 2018, at St. Mary Church in Corvallis, Oregon, for Loretta Dorothy Bruzda. Loretta was born in Detroit, Michigan, to Pauline (Szczepanski) and Travis Postelle Arie; Loretta... View Obituary & Service Information

The family of Loretta Dorothy Bruzda created this Life Tributes page to make it easy to share your memories.