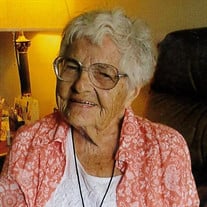 Lola Mildred Turnidge Grant January 16, 1922 – April 17, 2019 Lola Grant of Corvallis died Wednesday, April 17, at her home in Timberhill Place. She was 97. She was born in Lacomb, Oregon to Bertha Mae and Frank Turnidge. Her father died of appendicitis when she was 2, and she was raised by her mother and stepfather, Riley Weeks. She lived her entire life in Linn and Benton counties, graduating from Lebanon High School. She also attended banking classes at LBCC, scoring 99% on her American Banking Institute test. She worked at the First National Bank in Lebanon for 5 years, where she met and married Willard Franklin Grant. They later moved to a house on 43rd St. in Corvallis, where she worked at US National for about 2 years, and then in 1954 began at Citizen's Bank of Corvallis, where she worked for 25 years, first as a teller and later in Customer Relations. In 1960 Willard and Lola built a beautiful home on Vineyard Drive in the Lewisburg area north of Corvallis. It had a huge garden and barn. They entertained there often. In 1990 they moved to Meadowpark Mobile Estates in Corvallis. After Willard passed away in 1997, she moved to her home in Timberhill Place. She was an active member of First Baptist Church in Lebanon, then First Baptist Church in Corvallis. Throughout her life Lola was known for her generous, outgoing personality and her faith in Jesus. She loved her church, visiting with people, gardening, reading, and baking. She is survived by daughters Pat Hubbard of Walla Walla, Wash., Beverly Ragsdale of Corvallis, and Debra Pierce of Albany; three grandsons, one granddaughter, and 4 great-grandchildren. Memorial contributions may be made in her memory to First Baptist Church of Corvallis or Lumina Hospice in care of McHenry Funeral Home, 206 N.W. Fifth St., Corvallis, Oregon 97330. A public “Celebration of a Life Well-Lived” will be held on Monday, April 29, between 2 and 4 pm at Timberhill Place, 989 NW Spruce St, Corvallis.

Lola Mildred Turnidge Grant January 16, 1922 &#8211; April 17, 2019 Lola Grant of Corvallis died Wednesday, April 17, at her home in Timberhill Place. She was 97. She was born in Lacomb, Oregon to Bertha Mae and Frank Turnidge. Her father died... View Obituary & Service Information

The family of Lola Mildred Grant created this Life Tributes page to make it easy to share your memories.