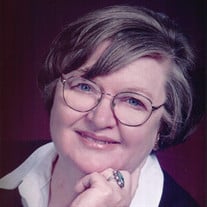 On February 1, 2019, Lita Jeanne (Nash) Verts passed away at the age of 83, at Regent Court Memory Care in Corvallis, Oregon. She was born April 13, 1935 in Jonesboro, Arkansas, the eldest daughter of the late Lolita Josephine (Peeler) Nash and William Gus Nash, Jr. On August 29, 1954 she married B. J. Verts of Missouri, and she gave birth to her only child, William Trigg Verts, II, on September 22, 1955. Lita and B. J. moved to Oregon in 1965, where they remained for the rest of their lives. Lita finished her B.A. degree at Oregon State in 1973, and her M.A. in Linguistics at the University of Oregon in 1974. Later in 1974 became an Assistant Professor and Director of the Special Services Project for the Equal Opportunities Program at Oregon State, where she worked until she retired in 1997 (although she continued to teach writing until at least 2001). Lita and B. J. divorced in 1975. Lita lived life in the large. Everything she did, she did with enthusiasm. She loved to travel, to teach, to garden, swim, lift weights, take photographs, cook, and was an avid fan of science fiction. She belonged to the Corvallis chapter of the D.A.R., and the First United Methodist Church. She volunteered at Lincoln Elementary School in south Corvallis. She also volunteered with the Office of the Long Term Care Ombudsman. For her work, she was honored in Salem at the 2011 Governor’s Volunteer Awards. Lita is survived by her son William T. Verts, Ph.D., her daughter-in-law Catherine Hodgkins Verts, and granddaughter RJ Verts of Amherst, Massachusetts. She will be lovingly remembered by her sister Carol Nash Smith of Hot Springs, Arkansas, nephews Kevin Goodin and Alex Goodin, of Jonesboro, Arkansas, nephew Mike Nash and niece Marty (Nash) Lawson of Cordova, Tennessee, and cousins Andy Peeler of Jonesboro, Arkansas and Karen Peeler of Columbus, Ohio, and her best friend Leslie Verts of Corvallis, Oregon. Lita was predeceased by her brother, William Gus Nash, III. A memorial service will be held at 1:00 PM on Saturday, August 3, 2019 at the First United Methodist Church in Corvallis.

On February 1, 2019, Lita Jeanne (Nash) Verts passed away at the age of 83, at Regent Court Memory Care in Corvallis, Oregon. She was born April 13, 1935 in Jonesboro, Arkansas, the eldest daughter of the late Lolita Josephine (Peeler) Nash... View Obituary & Service Information

The family of Lita Jeanne Verts created this Life Tributes page to make it easy to share your memories.