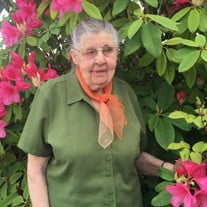 Lillian Elinor Nelson (January 30, 1927 – December 7, 2021) Lillian Elinor Nelson passed away on December 7, 2021, content just as she lived. She was born in Ladysmith, Wisconsin, January 30, 1927 to Emil and Martha Quick. She had nine brothers and two sisters. In February 1931, when the gospel came, her mother recognized these were the servants of God she had read about in the Bible. Lillian made her choice at a young age. She graduated salutatorian of her class and attended Normal School to become a teacher. Her first day of teaching, there was a polio outbreak that closed the school for the next two weeks. She met her husband, Dick Nelson, at convention. They went together and broke up seven times before they were married August 31, 1957. Dick joked that he married a school teacher to help him pay off his Hammond organ. They made their home in Bagley, Minnesota, where their first four children were born. They moved out to Oregon by train in 1962, when their fourth child, Darla, was only a few weeks old. Their youngest, Tony, was born in Oregon and 1964. In 1993, they became snowbirds and enjoyed traveling between Oregon, Minnesota, and Arizona. After Dick passed in 2007, she made Corvallis her home again. She loved having company, doing puzzles, and playing spinners with her grandkids. She is survived by her five children, twelve grandchildren, and twelve great-grandchildren with the thirteenth to arrive this week. She was preceded in death by her husband, Dick Nelson. A viewing is planned for 1:30 PM Friday, December 10, 2021 at McHenry Funeral Home chapel in Corvallis with a funeral service following at 2:00 PM. Burial will take place on 11:00 AM on Friday, December 17, 2021 at Twin Oaks Memorial Gardens. Please leave condolence messages for the family at www.mchenryfuneralhome.com.

The family of Lillian Elinor Nelson created this Life Tributes page to make it easy to share your memories.