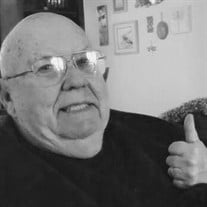 Lewis A. Tate of Corvallis, Oregon passed away peacefully early on the morning of October 27, with Ruth, his loving wife of 58 years by his side. Lewis was born in Long Beach, California, the oldest son of Oscar and Isabelle Tate (Lewis). He graduated from Long Beach Poly High School in 1955, earned an associates degree from Long Beach City College and became an x-ray technician at area hospitals, where he met his sweetheart and bride of 58 years, Ruth. Lewis and Ruth were married in 1961 at Lakewood Village Community Church and settled locally while he continued his education. He earned a bachelors degree in Biology from California Polytechnic University in Pomona, and accepted a position with Oregon State University managing the Botany department’s agricultural field lab. He proudly tended the farm for his entire career, working countless early mornings and long hours until his retirement from the university. Throughout his life, Lewis pursued and enjoyed many hobbies including fly fishing, winemaking, growing vegetable and flower gardens, and outings to area lakes and rivers. In his later years, he was simply happy to spend quality time at home with with his wife Ruth, friends and family, sharing meals and stories about his life and adventures. Lewis relished his retirement, enjoying many years of holiday gatherings and birthday dinners with his kids and grandkids, Botany department events, wine tastings with friends, traveling with his wife and family, and the special Oregon places he loved so much. The Metolius River, Twin Lakes Resort and the Oregon coast were among his favorites and will remain special to the family for years to come. Lewis should be remembered for his devotion to family and for his larger than life personality. He was a friendly and powerful voice in any room, and always happy to strike up a conversation with a stranger or help someone in need. Lewis is survived by his loving wife Ruth, his daughter Kathy Reynolds (Jeff) of Gresham and grandkids Max and Tate Reynolds, his son Sean (Jami) of Lebanon, and by his brother Glenn and family of Long Beach, California. Memorial contributions may be made to Evergreen Hospice of Albany.

Lewis A. Tate of Corvallis, Oregon passed away peacefully early on the morning of October 27, with Ruth, his loving wife of 58 years by his side. Lewis was born in Long Beach, California, the oldest son of Oscar and Isabelle Tate (Lewis).... View Obituary & Service Information

The family of Lewis Andrew Tate created this Life Tributes page to make it easy to share your memories.

Lewis A. Tate of Corvallis, Oregon passed away peacefully early...