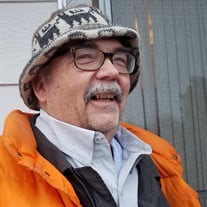 Lawrence Decker Winiarski, Sr. Lawrence “Larry” Winiarski, (81) of Corvallis Oregon passed away at home on August 5, 2021. He was preceded in death by his wife Flora (née Lester) and his older brother Walter “Marion” Winiarski. Surviving immediate family include his brother Frank, sons: Larry Jr, David, and Robert; and David's children: Benjamin, Joshua, and Meredith. Larry cherished and reminisced about those in his and Flora's families. Larry was born on July 10, 1940 in Tegucigalpa Honduras to Walter and Alice Winiarski. Walter was a mining engineer and Alice was a school teacher. In 1941, they moved to Leavenworth WA. In 1947, they settled in Kellogg ID, where Larry graduated High School. In 1962, he received a B.S in Mechanical Engineering from the University of Idaho. While working at General Dynamics in San Diego, he met Flora Lester, a mechanical engineer from North Carolina. They soon married. In 1964, Larry, Flora and one child moved to Corvallis where they had two more children. In 1971, Larry earned his Ph.D. in Mechanical Engineering at Oregon State University developing a formula to measure flow through a “Pulse Jet”, an engine with no moving parts. Before and after he graduated, he worked for the EPA. Larry and Flora, both engineers, purchased land in the coast range outside of Corvallis and Flora designed their home. Sadly, in 1979 Flora died. Larry, prayerfully found his vocation in dedicating his knowledge, creativity, and technical skills to help others. Through the efforts of organizations and the like-minded, Dr. Larry Winiarski became best known worldwide for the "rocket stove" concept, a set of designs and principles for a stove to burn efficiently and safely. This appropriate technology decreased labor, saved resources, lessened costs, and substantially reduced smoke implicated in health issues. Rocket stoves are adopted for and produced in businesses and millions of households. He taught combustion principles and stove construction in North / Central America, Africa, Haiti, Tonga, and Poland. Larry never sought riches but worked hard to disseminate rocket stove principles. He travelled and engineered for the poor. NGOs, friends and colleagues--who do good work and many who have published articles--express being inspired by Larry's work and contributions to the world. Larry was devoted to Nativity of the Mother of God Ukrainian Catholic Church in Springfield Oregon. He was a member of the Willamette Grange #52 and the Knights of Columbus. A widower, Larry started folk dancing and enjoyed it even in later years. He created incinerators, experimented with gasifiers; and met with persons who drive on wood. He was a Boy Scout leader and liked to ski, bowhunt, camp, fish and snorkel in streams. He was the coach of the regional championship team of “Olympics of the Mind” in 1983. He very much liked to tinker, meet people, and teach his technical skills. He was proficient in Spanish. On Wednesday, August 25, viewing will be from 1 pm – 4 pm at the McHenry Funeral Home, 206 NW 5th St. in Corvallis. On Saturday, August 28, at 10:30 am, a funeral and prayer service will be held at Nativity of the Mother of God Ukrainian Catholic Church, 704 Aspen St, Springfield. A planned live stream of the funeral service may be found under https://www.youtube.com/user/rjano/videos “Funeral of Larry Winiarski”. Later on Saturday, August 28 at 1:30 pm, “A Celebration of Larry's Life” will be held at Colgan's Island 79099, HWY 99 N, Cottage Grove. RSVP to [email protected] A live stream will be at https://www.youtube.com/watch?v=NjWfR5S7ac0. Or under Youtube “Aprovecho Research” channel, search “Larry Winiarski Celebration of Life.” Due to Covid-19 restrictions, please be vaccinated, use discretion, masks, and social distancing. Later reunions TBD. Online condolences may be posted at, https://www.mchenryfuneralhome.com/obituaries/Lawrence-Winiarski/#!/TributeWall, According to your heart, please consider sharing with the poor in practical ways; and donate to NGOs and charities.

The family of Lawrence Decker Winiarski created this Life Tributes page to make it easy to share your memories.