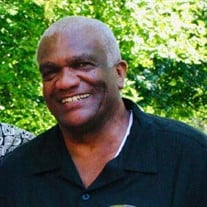 Lawrence Floyd Griggs, 76, of Corvallis passed away on Sunday, September 13, 2020. Born on May 26, 1944 in Meridian, Mississippi to the late Joseph H. Griggs and Mildred M. Griggs (Gaines), Larry moved to the Pacific Northwest during his high school years where he met his wife, Diane L. Griggs (Gerry). In 1972, he and his family relocated to Corvallis, Oregon so he could pursue a Ph.D. at OSU. He spent the remainder of his life working and raising three daughters in Corvallis. Lawrence was a devoted father and husband, and enjoyed sports, spending time with his daughters and grandson, and sharing laughs with family and friends. He will always be remembered for his educational values, passion for creating opportunities for underrepresented college students, his humble confidence, and genuine kindness. Larry loved the work he did for over 30 years at OSU, and spoke fondly of the students and staff he worked with, their achievements and enjoyed staying connected with them. Post-retirement, Larry volunteered with the Oregon Youth Authority mentoring incarcerated youth of color. Survivors include his daughters Linda M. Griggs of Albany, New York, Andrea B. Griggs of Portland, Oregon, Alicia G. Griggs of Albany, Oregon; grandson Charles L. Daniel of Portland, Oregon. He is also survived by his brothers Joseph H. Griggs of Honolulu, Hawaii, John A. Griggs of Burbank, California, Alvin S. Griggs of Champaign, Illinois, and several nieces and nephews. He was preceded in death by his wife Diane L. Griggs and brother Jasper Clark. Larry's daughters would like to thank everyone for their kindness and support during this difficult time. In lieu of flowers, they'd like to encourage donating to his Educational Opportunity Scholarship at OSU. To do so please visit: https://securelb.imodules.com/s/359/foundation/index.aspx?sid=359&gid=34&pgid=1982&cid=3007&bledit=1&dids=869 (for electronic communications) or osufoundation.org/LawrenceGriggs (for printed materials) A memorial service will be held at a later date.

Lawrence Floyd Griggs, 76, of Corvallis passed away on Sunday, September 13, 2020. Born on May 26, 1944 in Meridian, Mississippi to the late Joseph H. Griggs and Mildred M. Griggs (Gaines), Larry moved to the Pacific Northwest during his high... View Obituary & Service Information

The family of Lawrence Floyd Griggs PhD created this Life Tributes page to make it easy to share your memories.

Lawrence Floyd Griggs, 76, of Corvallis passed away on Sunday,...