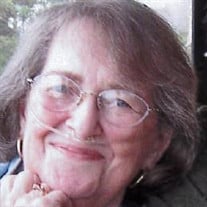 Kathryn Vosburg passed away Friday, July 24, 2020 at Good Samaritan Regional Medical Center, with her husband and three sons by her side. She was born March 6, 1942 in Hillsboro to Barbara J. White and James T. Richardson. She was a proud descendant of Benjamin Richardson, an 1846 Oregon Trail pioneer for whom Richardson State Park outside Eugene is named. She grew up in Eugene and was a member of the first graduation class from North Eugene High School in 1960. Following graduation, she began working as a secretary at the University of Oregon Department of Architecture and Allied Arts. Later she moved to the School of Business where she met her future husband, Arthur Vosburg. They were married in 1968 and moved to Corvallis where Art began working at American Can Company in Halsey. The family grew in 1970 when son Chris was born. He was followed by Matt in 1972 and Jim in 1979. A two-year job transfer took them to Connecticut and they happily returned to Corvallis in 1981. Being a homemaker and stay-at-home mom felt like a great privilege to her and allowed her to volunteer at school and the Benton County Museum. Her hobbies had always involved handiwork from crewel embroidery to counted cross-stitch, knitting, and eventually her great passion: quilting. Not only did it fulfill her creative side, it utilized her skills. It also brought many new and good friends and provided an opportunity to teach at local quilt shops. In 1998, she and Art took on the happy project of remodeling a home for retirement. A pole building for Art’s model railroad and a quilt studio inside the home gave them all the space they needed for their hobbies. She is survived by her husband, Art; sons Chris (Wendy,) Matt (Darlene), and Jim; her much loved grandchildren, Alyssa, Tristan, Brendan, and Brody; her brother, Tom Richardson, his wife, Susan Biskeborn, niece Mary, and brother-in-law Richard Blickle of Portland. She wanted a special shout-out to the members of Good Sam’s IV Therapy team who made her life better weekly since 1989—thanks for the ‘sticks’ and the friendships. There will be a graveside gathering at 11:00 a.m. Wednesday, August 5, 2020 at Oakville Cemetery. Please leave condolences for the family at www.mchenryfuneralhome.com.

Kathryn Vosburg passed away Friday, July 24, 2020 at Good Samaritan Regional Medical Center, with her husband and three sons by her side. She was born March 6, 1942 in Hillsboro to Barbara J. White and James T. Richardson. She was a proud descendant... View Obituary & Service Information

The family of Kathryn Louise Vosburg created this Life Tributes page to make it easy to share your memories.