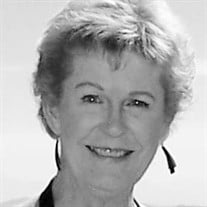 Kathryn Ann Leebelt (Kathi), 78, was born August 7, 1941 in Tampa, Florida. Her parents were Margaret (Berry) and Herbert Moore. She passed away at her home in Corvallis on Oct 4, 2019 with her partner at her side. A self-described Air Force brat, Kathi attended 13 schools throughout the southeast United States before graduating from Winter Park High School in Florida. She then attended Andrew College in Cuthbert, Georgia, where she was the college’s first yearbook queen. She married Kenneth Leebelt and lived in Alabama, Maryland, California and Washington. They had a son, Karl, and a daughter, Kendall. Following a divorce, she worked in the exhibits industry before forming her own signage company in the Seattle area, Architectural Graphics Resource, servicing major clients such as Boeing and area hospitals and school districts. She later retired and moved to Seaside, Oregon. She met Gary Chapman on Match.Com and eventually moved to Corvallis where she joined him in 2003. Kathi became a licensed realtor and worked for Windermere and ReMax before retiring for health reasons. She enjoyed, and excelled, in photography, decorating, and cooking. She also loved her cats over the years. Kathi was a long-time donor and attendee of the Oregon Symphony Association of Salem, the Oregon Symphony Pops concerts in Portland, and the Oregon Shakespearean Festival, especially enjoying the plays, restaurants, and wineries of the Ashland area. For sixteen years she aided her partner’s efforts on the Corvallis-to-the-Sea Trail and her “trail-widowhood” led Trail volunteers to proclaim: “that woman is a saint.” Together, Kathi and Gary renewed their lives and filled each other’s golden years with love, friendship and respect. Kathi was an amazing mother and grandmother to her family and admirably filled that role for Gary’s children, grand-children and great-grand-children. She was preceded in death by her parents, her especially beloved grandparents John and Katherine Berry, and her older sister, Carolyn. She is survived by her two children, Karl Leebelt and Kendall Leebelt, her grand-children Taryn Leebelt and Alex Leebelt, her half-sister, Donna Peters, and her partner, Gary Chapman.

Kathryn Ann Leebelt (Kathi), 78, was born August 7, 1941 in Tampa, Florida. Her parents were Margaret (Berry) and Herbert Moore. She passed away at her home in Corvallis on Oct 4, 2019 with her partner at her side. A self-described Air Force... View Obituary & Service Information

The family of Kathi Ann Leebelt created this Life Tributes page to make it easy to share your memories.