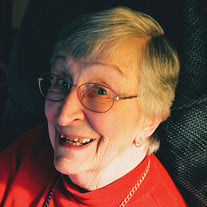 June Carol Rutquist Weiss June 2, 1930 – November 23, 2019 Beloved wife, mother, grandmother and great-grandmother, June left us peacefully on November 23. An Oregon native, June was born in Portland, Oregon on June 2, 1930, to Harry and Vera Rutquist. After graduating from Grant High School in 1948, she attended Oregon State College in Corvallis, living for a year in Waldo Hall before moving into the Alpha Delta Pi sorority house. During a social gathering with the men of Sigma Phi Epsilon, June met her future husband, Leslie Weiss, whom she married following his return from military service in 1952. June worked for Consumers Power after her graduation from OSC, while Les returned to his studies there. Following his graduation in 1954, the couple moved to Portland, where Les began his career with Pacific Telephone and Telegraph, later Pacific Northwest Bell, and June began her life as a loving, nurturing mother to her three children – Nancy, Barbara and Kent. As her children grew, June worked for the Mittleman Jewish Community Center and then for the consulting firm Barney and Worth, where she stayed until retiring a year after Les, in 1984. June and Les returned to Corvallis in 1986 to be close to their children and grandchildren. In retirement the couple loved to travel, and saw much of Oregon, the U.S. and the world on trips with the Elderhostel organization. She was also a long-time volunteer with the Good Samaritan Hospital Auxiliary, where she spent nearly twenty years assisting at the Cancer Center. She was also a dedicated volunteer for blood drives at the Church of the Good Samaritan, and was active in her PEO chapter. Most important to June in these years, though, were her five grandchildren. She loved having them over for dinner and sleepovers in the “grandkids’ room” and cooking them her famous macaroni and cheese, chicken and dumplings, and chocolate chip cookies - even while they were in college. June was preceded in death by Les, her husband of 57 years. Surviving her are her three children, five grandchildren and four great-grandchildren. They include daughter Nancy and her husband Greg Ulman, their children Shelby Van Orsow (Jeff) and Bethany Ulman (fiancee Kyle Dundas), and Shelby’s daughters Caleigh and Piper Van Orsow; daughter Barbara and her husband Gabriel Boenzli, their son Matthew (Carissa) and their daughter Madelyn; and son Kent (Julie), their daughters Rebecca Anderson (Scott) and Annette Patton (fiancee Ryan Brown), and Rebecca’s son Benjamin Anderson. A service and reception honoring the life and memory of June Weiss will be held in Simpson Hall at the Church of the Good Samaritan, 333 NW 35th Street, on Friday, November 29 at 2:00 p.m. In lieu of flowers, remembrances may be made in June’s name to the Corvallis PEO Chapter DQ or the Evergreen Hospice House. Please leave thoughts and memories for the family at www.mchenryfuneralhome.com

The family of June Carol Rutquist Weiss created this Life Tributes page to make it easy to share your memories.