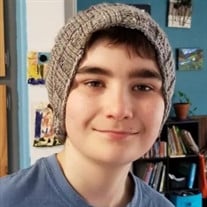 Jonathan Cupp passed away on September 17, 2020 at Randall Children’s Hospital in Portland, Oregon. His parents, Genece and Kyle, were by his side. He was 14. Jonathan was born on July 15, 2006 in Frisco, Texas. He spent his early childhood in that fast-growing, bustling city. In 2009, at the age of 3, Jonathan met his little sister, Vivian, who died shortly after birth. Despite the shortness of her life, Jonathan formed a special bond with her. In 2011, he welcomed another sister into his life — Mirielle, who would become his constant companion. Jonathan moved with his family to Cincinnati, Ohio in 2014, shortly before the birth of his little brother and soon-to-be sparring partner Rowan. The months in Ohio were a special time for Jonathan — a chance to be in the company of his grandparents. In 2015, Jonathan moved to Oregon, a state he quickly grew to love. He called three Oregon cities home: Portland, Corvallis, and finally Philomath. Jonathan adored the outdoors. The woods, forests, mountains, rivers, and beaches of Oregon were the setting of many adventures. He didn’t let a good climbing tree just creek in the wind unclimbed. He never hesitated to run ahead along a path, eager to see where it took him. Of course, being a kid in the 21st century, Jonathan spent a quality amount of time playing video games. When Jonathan wasn’t ridding Skyrim of dragons, kindling bonfires in Lordran, searching Hyrule for treasure, or building worlds in Minecraft — often with the help of his siblings — he was either absorbed in a book or intently focused on creating something. Jonathan loved to create. He fashioned swords, bows, chests, and battle axes made of wood. He constructed elaborate LEGO castles, ships, and trucks that rivaled anything you could buy in the store. He made origami dragons and crafted stone and crochet jewelry. He even sowed a pillow. He talked recently about wanting to open an Etsy shop where he could sell his creations and fund his creativity. When Jonathan made something, he more often than not made it for others. He was generous. His siblings could always count on him to offer them some of his allowance money so they could purchase Pokémon cards or a toy they wanted, but couldn’t quite afford. He always wanted to do right by others. To him, being kind and polite just made sense. He also made time for others. Jonathan enjoyed playing with his siblings, hanging out with his friends, and goofing off with his dog Willow. A day shared with those he loved was a day well spent. Funeral arrangements are under the care of McHenry Funeral Home in Corvallis, Oregon. Visitation will be held from noon until 1:00 p.m. on Friday, September 25, 2020. Jonathan’s service will begin at 1:00 p.m., with burial following at Mount Union Cemetery.

Jonathan Cupp passed away on September 17, 2020 at Randall Children&#8217;s Hospital in Portland, Oregon. His parents, Genece and Kyle, were by his side. He was 14. Jonathan was born on July 15, 2006 in Frisco, Texas. He spent his early childhood... View Obituary & Service Information

The family of Jonathan I. Cupp created this Life Tributes page to make it easy to share your memories.

Jonathan Cupp passed away on September 17, 2020 at Randall Children’s...