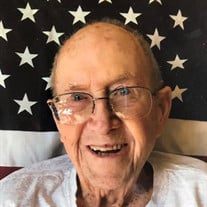 John (Jack) Sprick Jr., a long-standing Corvallis resident and World War II veteran found his awaiting angel on September 9, 2019. Jack, 95 years young, was born on April 2, 1924 in Timberlake, South Dakota. His parents John D Sprick Sr. and Shirley Johnson Sprick, farmed in South Dakota before moving their five children to Oregon in the 1930’s. John Sr. bought Murphy’s restaurant and bar, when it also had a service station and The Maple Lane Motel on the property in south Corvallis. Jack, like his brothers, was very athletic and excelled in sports. While attending Corvallis High School, he lettered all 4 years, with his strongest sport being baseball. Oregon State College coach Ralph Coleman asked him to join the team, but he chose to enlist into the Army instead, which he did on June 16th 1943, receiving honorable discharge from active duty on December 7, 1945. He tested well and went into flight school at Butler College, becoming a flight instructor for B-25 bombers while stationed at Blackland Army Air Field in Waco, Texas. He was very proud of his military service and enjoyed sharing his abundance of stories. He finished his service responsibilities in 1960 with the Amy Air force Reserves at the rank of First Lieutenant. Upon returning home to Corvallis, Jack enrolled at Oregon State College and pitched for Coach Coleman for one season and then left school to work for Pepsi Cola. In 1950 John married the woman of his dreams, Charlotte Gay Pease from Corvallis. The proud couple enjoyed the post war years and were blessed with three children. In 1952 Jack started Sprick Roofing, retiring in 1989 after selling the business to his son Randy and Lisa Sprick. Jack also was part owner of Beehive Truck Rental in Corvallis and a landlord of multiple rental homes he owned. Jack was a big OSU supporter and had season tickets for football and baseball games for many years. When he turned 90, the baseball team honored him at a home game to celebrate his playing in the 1940’s. He really enjoyed seeing his photo of him wearing his OSC baseball uniform on the big screen. He also loved to hunt, fish and golf which he continued to be active with up into his later years, always with a jovial competitive spirit. With all of his accomplishments, his love for his family stood out the most and was so proud of them all. John is survived by his sons; John R III (Linda) of Lake Charles, LA, and Randy of Corvallis, daughter Susan Ruef (Mike) of Lake Oswego, seven grandchildren; Chris Sprick (Brandy), Katie Baker (Dan), Maryn Umbreit (Eric), Christi Ruef, Rebecca Ross (Russ), Jason Sprick, Sarah Fontenot (Colby) and eight great-grandchildren. Preceding him in death were his parents; wife, Charlotte (2010) brothers, Dick, George and Garland and sister, Burdella Blackledge. A viewing will be from 3 to 5 p.m. on Thursday, September 19 at McHenry Funeral Home. Funeral services will be held at 1 p.m. Friday, September 20 at McHenry Funeral Home at 206 NW 5th St., Corvallis OR. A military burial will follow at Twin Oaks Memorial Gardens at 34275 Riverside Dr Albany OR. A reception will follow at Trysting Tree golf course 34028 NE Electric Rd, Corvallis, OR. In lieu of flowers, the family suggests donations to: Lumina Hospice & Palliative Care, 740 SW 4th St., Corvallis OR 97333.

The family of John "Jack" Sprick created this Life Tributes page to make it easy to share your memories.