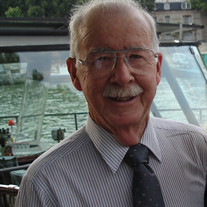 John William Schaer, 90, of Corvallis, Oregon died on December 1, 2020. John was born on October 3, 1930 in Pocahontas, Oregon to William Andrew Schaer and Anna May (Powell) Schaer. John was the youngest of their three children. The family was descendants of Swiss immigrants who farmed and logged in Oregon on his father’s side, and ranchers in Durkee on his mother’s. John grew up on the family farm working after school and during the summer alongside his father and brother. He remembered how happy he was when, as a young teenager, World War II ended and the family was able to stop farming with horses and bought their first tractor. John graduated from Baker High School in 1948 and was hired by Witham Brothers Construction Company in Baker City, Oregon. He worked for Withams for seven years. John met his future wife, Glenda Marie Ward while in high school. After Glenda graduated from college from both Oregon State University and Western State University, they married in 1955 and John decided he would enter college to complete a degree at what is now Western Oregon University. He earned a Bachelor’s Degree in Education and then a Master’s Degree in 1963. John was hired by the Corvallis School District and worked as an elementary teacher and then elementary school principal for the district for over 30 years. John and Glenda had three children, Mary, John and Karen and enjoyed raising their family in Corvallis and participating in many community activities. John fished on the Alsea River and returned with Glenda and their children often on Thanksgiving and every summer vacation to visit family and friends in Baker City. In Eastern Oregon, he especially loved boating, water skiing, fishing and hunting chuckers in the Snake River Valley. John and his wife Glenda took pleasure in traveling together. They first started traveling around Baker as a young couple on his Harley Davidson motorcycle. After they married, they visited many sites in the United States, Europe and North Africa. In the U.S.A. they visited Yosemite, California, Nevada, and Washington D.C.,and drove across America retracing the steps of their ancestors on the Oregon Trail. They toured many countries outside of the United States including England, France, Switzerland, Canada and Morocco. John is preceded in death by his wife Glenda and his siblings Arlene Spriet and brother-in-law Deal Spriet, brother Duane Schaer and sister-in-law Sherry Schaer. He is survived by his children and their spouses: daughter Mary (Schaer) Thompson and son-in-law Martin Thompsen, son John Schaer and daughter-in-law Christi Schaer, daughter Karen Schaer-Arib and son-in-law Ed Arib, grandson Jason Hirko and wife Megan Hirko, granddaughter Kelsi Schaer, grandson Will Schaer and wife Lauren Schaer, grandson William Arib and great grandchildren Jack Hirko, Henry Hirko, Claire Hirko, and Luke Hirko, and sister-in-law Beverly Schaer and many nieces and nephews. Memorial Donations may be made to the Oregon PTA Teacher Education Scholarship A celebration of John’s life will be scheduled for a later date.

John William Schaer, 90, of Corvallis, Oregon died on December 1, 2020. John was born on October 3, 1930 in Pocahontas, Oregon to William Andrew Schaer and Anna May (Powell) Schaer. John was the youngest of their three children. The family was... View Obituary & Service Information

The family of John William Schaer created this Life Tributes page to make it easy to share your memories.