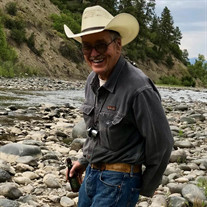 John Wilbert Good (77) passed away on Friday, February 18th, 2022 from heart failure. He was raised in Montrose, Colorado where his father, Dr. William O. Good, and his mother, Virginia Good, served the community with medical care and community leadership. As a kid, John shared his love of the outdoors with his brother and sister, Gary and Gale, especially his time on Daddy and Grandma Bakers' dude ranch and sheep farm. Daddy Baker gave John his high mechanical aptitude, and the Airforce added an electronics background. Both of these skills served John in his chosen professions of general contractor and Certified Arborist in Benton County, Oregon. John and his wife Judy Good met in 1973, and spent their lives together running a business (J.B.Good, Inc, Tree Service and Landscaping), going to college, fixing up old homes and constructing two new homes (with help from family and employees). John completed his undergraduate degree in Economics, and his graduate degree from Oregon State University in Soil Science and Mycology. John and Judy were both active members of the International Society of Arboriculture and the Oregon Soil Science Society where John served in a number of roles in those organizations. To illustrate John's balanced attitude towards life, he was often heard saying, "Sometimes you eat the bear, and sometimes the bear eats you.", and "If I die today, I've had a good life." John is survived by his wife, Judy Good, his brother, Gary, and sister, Gale, (both in California), and his two stepsisters Jamie and Pat Good (in New Mexico). If you would like to make a contribution in John's memory, he would have supported the Oregon Soil Science Society, reachable at [email protected] for Westside director Melissa Pingree, and the International Society of Arboriculture, Pacific Northwest Chapter, reachable at https://pnwisa.org/general/?type=contact. Please leave condolences for the family at www.mchenryfuneralhome.

John Wilbert Good (77) passed away on Friday, February 18th, 2022 from heart failure. He was raised in Montrose, Colorado where his father, Dr. William O. Good, and his mother, Virginia Good, served the community with medical care and community... View Obituary & Service Information

The family of John Wilbert Good created this Life Tributes page to make it easy to share your memories.