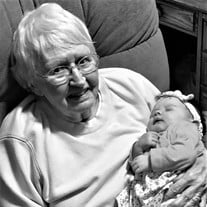 JoAnne Jones Phillips was released from her body’s physical pain on February 7, 2020. She was surrounded by loving family members that she cherished in life. JoAnne was born to Lawrence and Harriet (Hunt) Jones in Omaha, Nebraska on May 27, 1932. She moved as a young child with her family to Fort Thomas, Kentucky. After vacationing in Oregon, they returned in 1948, settling in Corvallis. She often said she felt at home here from the very start. JoAnne began her junior year at Corvallis High School and made friends with a girl who had a twin brother. Dating through their 1950 CHS graduation, Lavern Cary became JoAnne’s first husband in 1952. She was a homemaker several years through the births and young years of her five children. She later worked as a secretary, but spent most of her career as a library assistant at Harding Elementary School. It was through her school district connections that JoAnne was introduced to an elementary teacher, Dale Phillips. She surprised everyone by learning to ride his Gold Wing motorcycle with him! They were married 30 years. Dale was a wonderful caregiver through JoAnne’s declining health. JoAnne enjoyed Beaver sports, taking trips to visit family, Bunco with good friends, going to the coast and reading. Nothing, however, surpassed her love of family. Even after her first marriage ended, she remained an integral part of the extended Cary Family events. She loved spending time with her dear sister, Virginia, and the tradition of Easter with the Thompson family. Dale’s daughters and grandchildren became like her own, with frequent visits to Nevada. All her grand and great grandchildren were the delights of her life. She was thrilled to meet and hold her newest great granddaughter just two weeks before her death. She was preceded in death by her parents, grandson Owen Newlin, and step-grandson, Charlie Mreese. She is survived by her husband, Dale Phillips, sister Virginia Thompson; sons, Stewart Cary, Steve Cary; daughters Diane (Don) Vosburg, Theresa (Ron) Newlin, Kathleen (Brent) Adams; step daughters Barb Phillips and Heidi (Jim) Strejcek; ten grandchildren, 1 step granddaughter, and 6 great grandchildren. A Celebration of Life will take place Sunday, September 12, 1:00 pm, preceded by a light buffet beginning at noon, at The Officers Club in Adair, 6097 NE Ebony Lane, Corvallis. In lieu of flowers, please send donations to Lumina Hospice, 720 SW 4th Street, Corvallis, OR 97333.

JoAnne Jones Phillips was released from her body&#8217;s physical pain on February 7, 2020. She was surrounded by loving family members that she cherished in life. JoAnne was born to Lawrence and Harriet (Hunt) Jones in Omaha, Nebraska on May... View Obituary & Service Information

The family of JoAnne Jones Phillips created this Life Tributes page to make it easy to share your memories.

JoAnne Jones Phillips was released from her body’s physical pain...