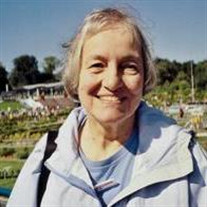 Long-time Corvallis resident Joan “Jo” M. Shaw died December 27, 2018, at Good Samaritan Hospital in Corvallis from the effects of Alzheimer’s disease. She was 91. Jo was born Marion Joan McKinney on June 2, 1927, in Fort Wayne, Indiana. Her parents were Walter F. McKinney and Marion P. McKinney. After high school, Jo studied liberal arts at Indiana University and graduated in 1949. That year, she married her college sweetheart, Richard “Dick” Floyd, in Essex, Connecticut. Jo and Dick then moved to Illinois, where Dick began his journalism career and Jo worked as a receptionist until she became a mother. Their daughter, Jill, was born in 1951 in Carbondale, Illinois. The family then moved to Rutland, Vermont, and later to Kalispell, Montana, where their son, Mark, was born in 1955. A year later, they moved east to Chester, Pennsylvania, and in 1957 to Miami, Florida, where they lived for ten years. Dick was a reporter at the Miami Herald and Jo was a homemaker. The family took long camping vacations during the summers, sleeping in their tent trailer, and visited almost every state in the nation and most national parks. Jo and Dick particularly liked the Pacific Northwest, and in December 1966, the family and their dog, Simon, drove their Dodge Dart from Miami to Lake Grove, Oregon. Jo, who was an avid reader and loved books, worked at a book company specializing in European books and Dick worked at The Oregonian. In 1970, they moved to Corvallis, where Dick worked at Oregon State University, and Jo worked at the OSU bookstore and volunteered to help foreign students to improve their English language skills. Some of those students became long-time family friends and joined the family for holiday celebrations. Jo and Dick retired in 1985 following Dick’s heart attack. They continued to enjoy traveling, despite his health issues, and explored several European countries, including Ireland, home to Jo’s ancestors. Dick died in 1990. Jo remained in Corvallis and in 1993 married Frank Shaw, a retired OSU history professor and she gained a stepson, Phil. Jo and Frank were active in book discussion groups, attended cultural events, actively followed politics, doted on their dog Dudley, and also loved to travel; they especially enjoyed their trip in Paris. Frank died in 2007. During her life, family was very important to Jo. She hosted family gatherings and kept in contact with all family members until it became too difficult because of her illness. She was close to her children, Jill Carroll and Mark Floyd (Dixie); grandchildren, Anne McCauley (Dale), Kevin Carroll, Kirby Tuck (John); stepson, Phil Shaw (Brian Maly); nieces, Barbara Chaffin, Mary Clayton, and Suzanne Shaw; and nephews, Michael Markwell (Terry Lesyk), Scott Waymire, and Will Clayton (Meredith); and to Bev Dirks, Dixie’s sister. Jo had one great-grandchild, Sawyer Tuck; and one great-great nephew, Malcolm Clayton. Education and reading were dear to Jo. She often gave books as gifts, and volunteered in the SMART (Start Making a Reader Today) program in Corvallis to help elementary students learn to read. Donations in her name can be made to SMART (https://www.getsmartoregon.org/get-involved/donate/). The family will plan a memorial gathering in the next few months.

The family of Joan "Jo" Shaw created this Life Tributes page to make it easy to share your memories.