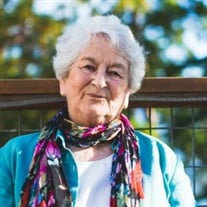 On January 11, 2019, Joan Dorothy McGuire, 88, peacefully passed away as she had lived—with gentleness, grace, and surrounded by family. “Kiwi Mum” was born October 2, 1930, in Lincoln, New Zealand, the daughter of Dorothy and Gerald Stoddart. She grew up on the family farm “Birchlea” in Lincoln. The family left the farm for three years living in Rangiora and Culverden before returning. Joan was taught by her mother for a year before going to local primary schools and then attending secondary school at St. Margarets. After school, Joan worked at the Agronomy in Lincoln. In 1952, Joan left her family home in New Zealand to marry William McGuire, whom she had met while he was attending Lincoln College in New Zealand as the first Fulbright Scholarship student. They were married in Hot Springs, Arkansas, on December 21, 1952. Their first home was in Starkville, Mississippi. From there, the family moved to Artesia, New Mexico, and finally to Corvallis in 1956 where William was a professor in the Crop Science Dept. at Oregon State University. Joan was a lover of nature and the out of doors. She was an avid walker and also enjoyed camping, hiking, gardening, golf, and spending time at the family farm. Favorite hobbies included reading, knitting, and playing scrabble. Joan loved to travel—especially back to her beloved homeland to visit family. At age 69, she completed the Milford Track, a 35 mile hike through the fiords in southern New Zealand. JC, as Joan’s family home in Corvallis came to be known, was the hub of many holiday gatherings and family get togethers. An amazing cook, she was especially well known for her shortbread. The recipe came from friends on a remote sheep station in New Zealand. Although simple in ingredients, no one could come near to mastering her technique. In later years, Joan became active in the Marysville Ladies Golf Group, volunteered at the OSU Thrift Shop, and enjoyed socializing with the Farm Crops group of friends. She was fortunate to have a close group of neighbors who became wonderful friends. Joan was an incredible homemaker and absolutely loved spending time with her nine grandchildren. She always enjoyed a “nice cup of tea” (it could cure anything) and a visit. She will be dearly missed but in our hearts forever. Joan was preceded in death by her parents and her husband of 55 years, William. She is survived by her daughter Jennifer of Coos Bay; sons and their spouses Tim and Terri of Albany, Michael and Jana of Snohomish, Wa., Jonathan and KK of Seattle; brothers Roger Stoddart of Rangiora, New Zealand, and John Stoddart and wife Hilary of London, England; grandchildren Colleen, Ian, Amanda, Madeline, Tyler, Emily, Jacob, Finola, and Gracey; great-granddaughter Lily; and many nieces, nephews, and cousins. A funeral service will be at 12 noon on Saturday, February 2, at the Episcopal Church of the Good Samaritan in Corvallis. Following the service will be a reception at the church with interment at Oak Lawn Memorial Park at 3 p.m. Online condolences may be extended to the family via www.mchenryfuneralhome.com. Contributions in Joan’s memory may be made to: Good Samaritan Episcopal Church, 333 NW 35th St, Corvallis, OR 97330.

The family of Joan McGuire created this Life Tributes page to make it easy to share your memories.