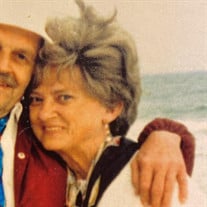 Jo Lynn Allen passed away peacefully on Tuesday, September 28, 2021, surrounded by family. She was born on July 9, 1931, daughter of Carl and Oleta Wingard, with two brothers, Jim (“Sonny”) and Dan, and two sisters, Mary Agnes (“Muff”) and Sue. During her 90 active years living in Missouri, Arkansas, Alabama, and Oregon, Jo Lynn received recognition as a champion golfer and bowler, dedicated volunteer, community leader, avid adventurer, and trendsetting tour guide. Jo Lynn grew up as one of five children in Pine Bluff, Arkansas and went on to graduate high school. Afterwards she met Jessie Frames, a member of the U.S. Air Force and the father of her three children, Joel, Carl Ray, and Vicki. Working as an insurance saleswoman, Jo Lynn and Jessie raised their three children in Pine Bluff. With the children grown up, the couple was ready for warm weather and bay breezes. In 1989, Jo Lynn and Jessie moved to what would affectionately be called the “beach house” in Elberta, Alabama. At the beach house, the four grandchildren spent summers with Jo Lynn and Jessie, sailing and swimming in the bay, picking pecans, and begging for a “grandma treat.” After a few years, Jo Lynn and Jesse divorced. Jo Lynn continued living in Alabama attending dances at the Foley Senior Center. In April of 1995, a big change came into Jo Lynn’s life. At one of these dances, a gentleman from Oregon asked her for a dance. He told her his name was Cosmo and he was in town visiting his brother, Herb. He bragged to her that he had been a happy bachelor for 25 years, and she told him that was long enough for any man to be happy. Three months later she stunned her family and friends by moving to Corvallis as Cosmo’s bride. Avid travelers, Jo Lynn and Cosmo loved camping, riding the Amtrak train, and having new adventures. In Corvallis, Jo Lynn continued living her life filled with love and community spirit by volunteering with the Chintimini Senior Center, serving as tour leader at the senior center, and making many new, dear friends. She and Cosmo were known to shake a leg at the local dances doing the two-step, polka, and foxtrot. She enjoyed trying her hand at Pinochle, winning at dominoes, and participating in sing-along groups. You could always tell Jo Lynn was in the room by the sparkle of her attire, which matched the sparkle in her blue eyes. Her energy and spirit will surely be missed. Jo Lynn was preceded in death by her husband of 20 years Theodore “Cosmo” Allen, her son Joel Frames, her brothers Sonny Wingard and Dan Wingard, and her sister Muff Glover. Jo Lynn is survived by her sister Sue, daughter Vicki and her husband Darrell, son Carl Ray, and her four grandchildren: Kim and her husband Dave, Christy and her husband John, Lauren and Joel. Jo Lynn was also the great-grandmother of Matthew, Jackson, Samantha, and Annabelle. A private family service was held at Corvallis I.O.O.F

The family of Jo Lynn Allen created this Life Tributes page to make it easy to share your memories.