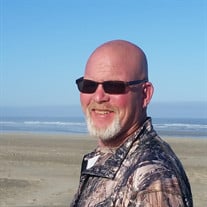 Jeff Lawrence Moller, 50 of Albany died on June 24, 2019. He was born May 8, 1969 in Anaheim, California to Janice (Frawley) Moller and Richard Moller. Jeff made the family complete, joining sister, Lori (Wilson) Moller and brother, Glenn Moller. When Jeff was 2 months old the family moved from Anaheim, California to Gold Beach, Oregon. Jeff graduated from Gold Beach High School in 1987. He then joined the United States Marine Corp. While in the Marines Jeff served in California, North Carolina and Okinawa, Japan. After being discharged from the Marines Jeff returned to Oregon where he attended Chemeketa Community College earning a degree in Construction. From there, Jeff worked for Bob Grant Construction in Corvallis. He went on to work for Safari Motor coach, in Harrisburg. From there he moved on to Palm Harbor Homes in Millersburg. After learning many different aspects of building manufactured homes Jeff joined Tony Ocampo and learned how to set the homes. After that Jeff ventured out on his own opening Some Assembly Required Construction, which Jeff owned and operated until his death. Jeff met Grace Hornaday on March 11, 1994 while in Corvallis. They immediately hit it off and started dating. On July 4, 1995 Jeff purposed to Grace under the fireworks in Albany. Jeff and Grace were married in Bellfountain at the Bellfountain Community Church on March 2, 1996. Jeff and Grace welcomed their first born, a beautiful baby girl, Brittney on August 4, 1996. Their second born, a beautiful baby boy, Justin joined and completed the family on December 17, 1998. The family resided in Tangent. They later moved to Albany in 2001 and have resided there ever since. The family enjoyed many trips around the Pacific Northwest but, was always happiest to stay in Oregon and enjoy Bend and surrounding area’s however, Jeff always felt most at home along the Oregon coastline. Jeff was a sweet, loving, kind man. He enjoyed giving to others. Jeff’s main purpose in life was to make those around him happy. Jeff was known for his generosity. While being quite shy and reserved Jeff was known to his family and friends for his sense of humor and loyalty. Jeff was a football player and wrestler in high school. He also coached t-ball/baseball while in Gold Beach. As Jeff and Grace’s kids grew the family became very busy with volleyball, basketball, wrestling and football. One of Jeff’s biggest joys in life was coaching, especially his son. Jeff was extremely proud of his kids and was blessed to be their Father. He never missed an opportunity to tell them how much he loved them and how proud he was of them. Jeff is survived by his wife, Grace, daughter Brittney, son Justin, sister Lori (Moller) Wilson, and brother Glenn Moller. He also leaves behind many nieces and nephews along with Grace’s mom and dad, Charles and Nancy Hornaday. Jeff was preceded in death by his Father, Richard Moller and his Mother, Jan Moller. As a family we would like to thank everyone for the enormous outpouring of love and support at this very difficult time. Jeff would be so touched by the generosity of friends and the way that everyone has surrounded his family and has taken care of them. Please join us for a Celebration of Life at 11:00 am on Tuesday, July 2nd at McHenry Funeral Home, 206 NW 5th St. Corvallis, Oregon 97330. A reception will follow at Avery Park, Maple Grove Shelter, 1300 SW Avery Park Dr. Corvallis, Oregon 97333. A light lunch will be provided.

The family of Jeff Lawrence Moller created this Life Tributes page to make it easy to share your memories.