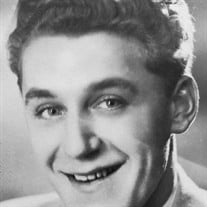 Jean Charron June 1, 1930 - November 7, 2021 Jean was born in St. Martin, New Brunswick, Canada. He was the 13th child of 18 siblings born to Alma Thibault and Leonce Charron. His mother lived to 101 years old. Early in his life Jean worked with his brothers and father in construction, building school houses and churches in the Maritime provinces. Jean married Claire Ouellette in Baker-Brook, New Brunswick, October 11, 1952 and within a few years they moved to the states where Jean worked in carpentry with some of his brothers. The family eventually settled in Bethlehem, Pennsylvania. With hard work, and the help of his wife Claire as the manager of his remodeling company, they were able to retire at 56 years old. Jean and Claire moved to Dania Beach, Florida in 1991. They so enjoyed retirement in the warmer climate and time spent with family and friends, including a large community of fellow French Canadians. Jean and Claire moved to Corvallis, Oregon in July of 2020 to live with son Paul and his wife, Amy. Jean is preceded in death by his wife Claire, 1929 - 2020, son André, 1953 - 2016, eight brothers and seven sisters. Jean is survived by his son, Paul, one brother, one sister, six grandchildren, seven great grandchildren, and nearly 100 nieces and nephews. Donations in Jean’s memory can be made here: https://give.ohsufoundation.org/?pid=neuro

The family of Jean Charron created this Life Tributes page to make it easy to share your memories.