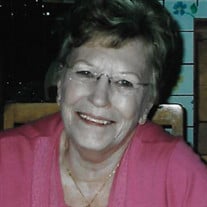 Janice (Jan) Marlene Bennett passed away Tuesday, October 20, 2020 at Good Samaritan Regional Medical Center after complications due to a fall. Her only daughter, Ronda Lindley-Bennett, was so incredibly grateful to be by her side to talk, laugh and share stories of love and strength until the end. As family members shared text messages, videos and words of encouragement as she fought to get stronger Ronda was able to share them with her so she could feel their love and support. Janice was born to the late Carl and Janita Bennett, long time Philomath residents and business owners, on October 2, 1936. Janice grew up in Philomath in various homes, until the family grew into 3 girls and 2 boys, landed in the yellow house on the hill at the Hwy 34 and Hwy 20 intersection at the west end of Philomath. As you can imagine there were horses, cows, chickens, cats and dogs and plenty of room for 5 kids to run and get into mischief. Although there was 20 years difference between Janice and her youngest brother, Don Bennett, she remained a constant in his life. Carl and Juanita gave Janice two wonderful sisters and two wonderful brothers that remain close to this day. Carl and Juanita instilled in the five siblings how important family love, support and closeness was and stressed the importance of staying connected even when those we love pass on to another life. When Juanita was alive and keeping the family close we could show up on any Sunday morning and be welcomed by the smell of bacon, eggs, biscuits, pancakes or French Toast. We were all welcome any day of the week, but Sunday’s were super special. After her 1954 graduation from the “old” Philomath in the location of what is today True Value stands, Janice embarked on higher education path and joined Delta Delta Delta sorority at Oregon State University to get her teaching degree. In 1955, on October 9th Janice, met, dated and finally married fellow student and log truck driver, Ronald Lee Lindley, while she worked at the local Philomath Dairy Queen. After several mis-carriages she ended up with a beautiful baby girl she could tell was a fighter from the day she arrived on February 24th, 1961. The little tear drop trailer they had as a small family produced many, many camping trips and good times. Honeyman State Park was always a favorite. Soon after Ronda was born, Jan and Ron divorced, but rekindled their relationship and married once more, but the marriage was not to last, and they later divorced. He remained the love of her life even after his death in 1967. In 1969, Jan met and married a local police officer that had family in Kentucky where they later moved to Central City Kentucky and spent 8 years. Jan and Ronda never considered the state home and their fondest memories were receiving cards, letters, packages and calls from home. Janice’s family meant everything to her she cherished each one of her sisters, brothers, nieces, nephews dearly. Many Bennett family traditions were loved and kept alive by Janice. Family photos lined the pages of countless albums and frames. To Janice, “Family is Forever.” She well understood not everyone may see eye to eye or agree on everything, but at the end of the day they were there for one another in ways that were loving to the core. After working several jobs from bank teller to managing ice cream shops, owning restaurants, managing fitness centers, car dealerships, bakeries and convenience stores she finally retired from Oregon State University in the office of Admissions and Orientation. She attended as many of her many nieces and nephews sporting events, plays and graduations whenever she could. She was especially fond of watching Oregon State Volleyball once her niece, Haylie Bennett, began playing in 2016. When she wasn’t attending family events she was crocheting, cooking and caring for her daughters Golden Retrievers of whom she considered part of the family. It was not a normal day if she wasn’t cleaning up dog hair. She opted for a quiet, reflective, slower paced family life where she worked in her yard, tended to her flowers. She was quick to stop what she was doing to sit and have a conversation with anyone that showed up to her home. Her greatest desire was to put a smile on someone else’s face. Janice’s love for her daughter, Ronda, was immeasurable. The two had a special bond that in destructible. In many ways their motto was, “You and me against the world – let them try to break us”. They loved each other deeply. Janice was preceded in death by her parents, Carl and Juanita Bennett, several aunts, uncles, cousins, and friends. Janice is survived by her daughter, Ronda Lindley-Bennett, Philomath. Sisters and spouses Karen and Rod Berklund, Joanne and James Baumann, brothers and spouses Denny and Sue Bennett and finally, but far from least important Don and Helen Bennett all of Philomath. Nieces and nephews, Kathy Franklin, Eugene, Kevin Berklund, Philomath, OR, Marlene Roe, Philomath, Carla Johnson, Beavercreek, OR, Brad Bennett, Philomath, OR, Brian Bennett, Philomath, OR, Amber Nicole Kolkmeier, Yorkville, IL, Haylie Bennett, Philomath, OR, Chase Bennett, Philomath, Daniel Meyer, PA, Chris Meyer, Philomath, Lauren Berklund, Mitchell Berklund, Philomath, Hannah Bennett, Nate Bennett, Philomath, Gavin Bennett, Philomath, Addison Kolkmeier and Aiden Kolkmeier, Yorkville, IL. Janice Marlene Bennett (Big Jani) October 2, 1936 – October 20, 2020 “It’s always darkest before the dawn; it’ll all workout.” ~Big Jani

Janice (Jan) Marlene Bennett passed away Tuesday, October 20, 2020 at Good Samaritan Regional Medical Center after complications due to a fall. Her only daughter, Ronda Lindley-Bennett, was so incredibly grateful to be by her side to talk, laugh... View Obituary & Service Information

The family of Janice Marlene Bennett created this Life Tributes page to make it easy to share your memories.