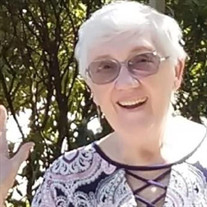 Janet Eileen Day Noteboom, 87 of Albany, went home to the Lord on September 23, 2020 surrounded by her loving family. Born on February 6, 1933 in McMinnville, Oregon to Delbert (Pop) Day and Opal Bond Day, a descendant of pioneers of The Lost Wagon Train. She grew up in Tillamook, Oregon, where she met her lifelong sweetheart, Dorence, in grade school. They married August 2, 1953 in Eugene and enjoyed 67 years together. They made lifelong friends throughout their travels; first on military assignments and later worldwide to Mexico, Japan, in Europe where they even danced in the company of Kings and Queens in Lichtenstein, and their always beloved Hawaii. They settled in Cave Junction, Oregon in 1958 where Janet was a homemaker and raised their two daughters (The Girls), and was active in the Methodist Church and Garden Club. She was an avid golfer and bowler, and known for her award-winning floral arrangements. An OSU alum, Delta Delta Delta sorority member, and lifelong Beaver fan, Janet was delighted when they returned to Corvallis in 1987, actively following the Beaver men and women in nearly every sport. She joined the Newcomers Club and volunteered for over 25 years with the Good Samaritan Auxiliary in many capacities including flower delivery, guest artist displays, and the Mario Pastega House. Janet also volunteered for over 30 years delivering Meals on Wheels. She was known for going the extra mile in celebrations and bringing a lavish flare to all her endeavors, donning it with her charming smile and everlasting kindness and generosity. Janet is survived by her loving husband, Dorence; daughters Kathy (Doug) Johnson and Susan (Mark) Leas; 7 grandchildren and 10 great grandchildren. She is preceded in death by her parents, and her beloved sister, Phyllis Day Tannler of Tillamook. Thank you to the staff at Waverly Place for your kindness and care. Donations in Janet's memory may be given to the Mario Pastega House through the Good Samaritan Hospital Foundation (3600 NW Samaritan Dr. Corvallis, OR 97330) and to Meals on Wheels of Benton County (C/O Corvallis Elks Lodge 1400 NW 9th St Corvallis, Oregon 97331). Due to Covid-19, a private service and internment will be held at Oak Lawn Cemetery. McHenry Funeral Home is handling the arrangements. Online thoughts and memories for the family may be posted at www.mchenryfuneralhome.com.

Janet Eileen Day Noteboom, 87 of Albany, went home to the Lord on September 23, 2020 surrounded by her loving family. Born on February 6, 1933 in McMinnville, Oregon to Delbert (Pop) Day and Opal Bond Day, a descendant of pioneers of The Lost... View Obituary & Service Information

The family of Janet Eileen Noteboom created this Life Tributes page to make it easy to share your memories.