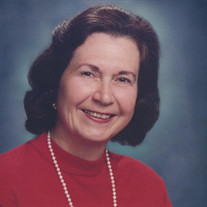 Jacqueline B. Bopp, 88 years passed peacefully into the arms of our Lord on October 25, 2021 in Corvallis, Oregon with family at her side. She had recently moved to Oregon to be closer to family. Jackie was born April 30, 1933 to William and Adele Bergmann in Washington, Missouri. In 1951 she graduated from Lutheran North High School in St. Louis, Missouri and then attended Valparaiso University where she met the love of her life Raymond K. Bopp. She and Ray moved to Nashville, Tennessee in 1952 where he attended Vanderbilt Medical School and she attended Peabody Teachers College. They were married September 11, 1954. She graduated from Peabody in 1955. Her first job was as a high school biology teacher in Nashville, Tennessee. Following Ray’s graduation from Vanderbilt they moved to New Haven, CT where he began his surgical residency and she worked in the research lab on the early development of the birth control pill at Yale-New Haven Hospital. From 1958-1960 they lived in Huntstatin, England while Ray was stationed at Royal Air Force (RAF) Station Sculthorpe. In 1958 their first child was born, Sandra Lynne. They returned to Yale-New Haven in 1960 and Jackie became a stay-at-home mom. Their second child, Jeffrey Raymond was born in 1961. Following completion of his surgical residency in 1964, the family moved to Belleville, IL where Ray returned to active duty during the Vietnam Conflict at Scott Air Force Base. In 1965 their third child,Ellen Ruth was born. In 1969 they moved to Mansfield, Connecticut when Raymond joined the Windham Surgical Group in Willimantic, CT. Jackie’s life revolved around her family. Following the death of her mother in 1963 her father “Grampy” moved in with the family. Jackie dedicated her life to her husband and raising and nurturing her children. She enjoyed attending school functions as a room mother, school plays and athletic events. She was regularly seen on the sidelines watching Jeff and Ellen play soccer through their college careers. She was never happier than to have her dinner table full of the children’s various friends and teammates. In 1970, Ray’s father built the house on “the hill” which is where Jackie lived until recently. She loved gardening. She and her father developed and maintained the magnificent flower and vegetable gardens that have been enjoyed by many at various functions held on “the hill”. They grew enough fruits and vegetables to last the family for the entire year. Neighbors and friends were regular recipients of fresh vegetables and beautiful roses. Jackie enjoyed entertaining with family events (Ellen and Glen’s wedding, holiday meals) the annual neighborhood 4th of July party, garden parties, bridge parties, and retirement parties. Jackie loved all animals. She enjoyed the dogs, cats, roosters, chickens and horses. There were no luckier cats than those that wandered up to Jackie’s house on Wormwood Hill. Jackie enjoyed volunteering. She was a lifetime member of the Windham Community Memorial Hospital Auxiliary serving in numerous leadership roles. She served on the Board of Directors, Chair of the membership committee and President of the Mansfield Branch of the Auxiliary. She was also very active in PEO, an international philanthropic women’s organization that benefits women through educational scholarships, loans and grants. She was President of her local Chapter. For several years she actively recruited potential recipients for the International Peace Scholarship. Her annual summer bridge/garden fundraiser has been described as the summer social event which always raised significant money to support PEO projects. Following Rays retirement in 1995 they kept busy with going to the opera and shows in NYC as well as travel to Europe, Russia and throughout the United States. The best trips were those to Oregon to visit their grandchildren, Karl and Katy. Jackie enjoyed her time vacationing in Black Butte, Oregon riding bikes, hiking and enjoying the lovely scenery. Other fun trips with the grandchildren included Walt Disney World, New York City, Mt St Helens, the National Parks of the desert southwest and many local trips in CT and Oregon. She was predeceased by her parents and her husband Raymond. She is survived by her three children Sandra (Charles) Kinsella, Jeffrey (Donna) Bopp, Ellen (Glen) Schmidt and her two grandchildren Karl and Katy Schmidt. The family would like to thank Paul Matty, MD for his excellent medical care of Ray and Jackie. They would also like to thank all the individuals who became friends for the excellent care received by both Ray and Jackie from April’s Home Health Care and Royal Home Health Care , as well as the care from the staff at Willamette Springs Memory Care facility. Jackie has been described as a true lady in every sense of the word. She will be missed by her family and friends; but she is reunited with her love, Raymond and in heaven with her Lord. On November 12 there will be a memorial service in Corvallis, Oregon at Shepherd of the Valley Lutheran Church beginning at 11 AM. On December 3 there will be a memorial service at Redeemer Lutheran Church located at 328 Village Hill Rd. Lebanon, CT beginning at 11 AM. All arrangements are being handled by McHenry Funeral Home in Corvallis, Oregon. Please visit their web page for further details www.mchenryfuneralhome.com/obituaries/Jacqueline-Bopp. In lieu of flowers memorial donations can be made in Jackie’s name to the Windham Hospital Foundation 112 Mansfield Avenue Willimantic, CT 06226 or to The PEO International Peace Scholarship at PEO Executive Office 3700 Grand Avenue Des Moines, IA 50312 or online at www.peointernational.org, select to giving opportunities and scroll to PEO International Peace Scholarship.

Jacqueline B. Bopp, 88 years passed peacefully into the arms of our Lord on October 25, 2021 in Corvallis, Oregon with family at her side. She had recently moved to Oregon to be closer to family. Jackie was born April 30, 1933 to William and... View Obituary & Service Information

The family of Jacqueline Bergmann Bopp created this Life Tributes page to make it easy to share your memories.

Jacqueline B. Bopp, 88 years passed peacefully into the arms...