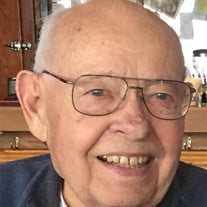 Jack was born and raised near Blanchard, Oklahoma. He was the fifth of eight sons and one daughter of Gene and Grace Richey. As a senior at Blanchard High School, he was the school body’s 1947 “All-Around Boy.” Jack married the love of his life and school sweetheart, Vera Isom, in 1948. In July, Jack and Vera, along with their family, celebrated their 70th wedding anniversary. Jack, with brothers Purman, Shi, and Leroy, owned and operated Richey’s Markets in Corvallis and Albany for almost 50 years. He thrived serving their customers and contributing generously to both communities, which included sponsoring the Corvallis American Legion baseball team for 40 plus summers. He was also proud of the hundreds of high school and college students he hired and mentored. He is survived by Vera and their children Jacque, Tony, and Ron. Their oldest son, Larry, passed in 2014. He is also survived by his children’s spouses, six wonderful grandchildren, and eight heartwarming great-grandchildren. They most appreciate his extraordinary generosity, regular and frequent teachings, and loyalty to Vera. He will be missed by his sister Fern, older brothers Raymond and Bill, and younger brothers Carl and A.B. Jack’s family is most grateful for the loving care he received from the caregivers of Evergreen Hospice. The family of Jack Richey will host an open house honoring Jack on Sunday, November 18 from 2-4 pm in the Mennonite Village Chapel at 5353 Columbus Street SE, Albany. A warm welcome and grandkids tribute at 2:45. In Jack’s memory, please consider contributing to either the Boys & Girls Club of Corvallis or the Corvallis American Legion Baseball at Hansen Stadium in care of McHenry Funeral Home, 206 NW 5th St., Corvallis, OR 97330. Both the club and team were important to Jack.

Jack was born and raised near Blanchard, Oklahoma. He was the fifth of eight sons and one daughter of Gene and Grace Richey. As a senior at Blanchard High School, he was the school body&#8217;s 1947 &#8220;All-Around Boy.&#8221; Jack married... View Obituary & Service Information

The family of Jack Richey created this Life Tributes page to make it easy to share your memories.

Jack was born and raised near Blanchard, Oklahoma. He was the...