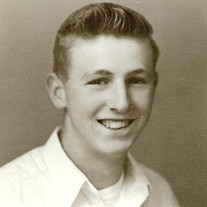 Jack Humphrey May 4, 1934 – October 5, 2019 Jack Humphrey of Shedd passed away October 5, 2019. Jack was born in Bellfountain, Oregon, on May 4, 1934, to Fred and Capitola Humphrey. He was the youngest of their six children. Jack grew up in Bellfountain and South of Corvallis near the Greenberry area on the Hurlburt family farm. As the youngest of 4 brothers, Jack spent a lot of time working on the family farm, hunting and fishing in the mid valley. He attended Judd Smith Grade School and graduated from Corvallis High School in 1952. He was active in FAA throughout his high school years winning several awards. In the early 1950’s, Jack served in the Army and was stationed in Texas, New Mexico and New Jersey. He worked with the first generation of Nike Missiles. In 1956, after returning to Oregon, he married Myrna Emery. Jack started his career in the logging industry working for M & W Logging before he was severely injured in a logging accident. After recuperation, he joined his father-in-law, Roy Emery, in the grass seed farming industry, creating Emery and Humphrey Farms. Jack was involved in farming for over 40 years. Jack is survived by all three of his children and their spouses, Dale and Leslie Humphrey, Karen and Todd Marchbanks, and Bonnie Humphrey-Anderson and Ron Anderson. He is also survived by five grandchildren, Taylor Sherfy, Brittney Humphrey, Makenzie Kropf, Levi Marchbanks and Emily Marchbanks; and five great-grandchildren, Wyatt Humphrey, Kaitlyn and Cole Sherfy and Madison and Jace Kropf. A service will be held at the Oakville Church at 1 pm on Friday, October 11th. Please leave your condolences at www.mchenryfuneralhome.com

The family of Jack Russell Humphrey created this Life Tributes page to make it easy to share your memories.