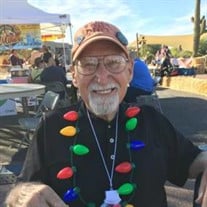 Stan was born in Salem, Oregon, to Robert Franklin Lowther and Mae Earnestine Eckhart Lowther. He passed away in his sleep at a hospital in Scottsdale, Arizona, two days after suffering a heart attack. He grew up in the Woodstock area of Portland, where his dad and uncles were carpenters building houses. In about 1926, they bought a farm in Blodgett and had 32 milk cows. After the Great Depression hit, they lost the farm and moved to Philomath. At the age of 14, he got his first job in a restaurant as a busboy/dishwasher for a summer in Portland. His brother Chet helped him get the job. He attended Blodgett Grade School, where he rode a horse about two miles to school, and then Philomath High School, graduating in 1936. While in high school, he was the art editor of the school paper and would work on drawings at the school into the evenings. His first job in Philomath was making candy at Charlie Barkley’s candy and ice cream store after school every day for two years. After graduating, he bought the business with a $2,000 loan from the local bank based on the recommendation from the high school principal, Lee Powell. On April 26, 1940, he married Hazel Viola Gee, and she and her mom, Lillian, ran the store as Stan started logging for his brother-in-law, Rex Clemens. They supplied candy to Wagners Restaurant and Candies in Corvallis for a few years before selling the business. He would log during the day and make candy in the evenings. While working for Rex he ran an earth mover they named Myrtle to dig one of the log ponds at Rex’s sawmill in Philomath. He would eventually start his own logging company and built a stud mill at Klikitat Lake west of Marys Peak. In the mid 1950’s he bought the Phil-o-Rink in Philomath and sold it in the 1960s. He was a “cat skinner” for most of his life and cat logged for his three sons after “retiring.” Stan and Hazel would spend three months in Arizona every winter for years after he closed his logging business. He operated a bulldozer into his early 90s. He donated the property for the city park, the building for the high school forestry department, and built the baseball field at the Kings Valley School. A few years after Hazel’s passing in 2006, he moved to Carefree, Arizona, where he lived until his death. While in Arizona he would walk up to two miles every day until the last four months. He would sit on a bench outside the post office and talk to the people coming to get their mail. After a year or so he said he knew everybody in Carefree. He also would drive back to Oregon by himself for visits, the last time for his 100th birthday. During his life, he drove all over the United States including Alaska, and also to Mexico City.

Stan was born in Salem, Oregon, to Robert Franklin Lowther and Mae Earnestine Eckhart Lowther. He passed away in his sleep at a hospital in Scottsdale, Arizona, two days after suffering a heart attack. He grew up in the Woodstock area of Portland,... View Obituary & Service Information

The family of Ivan Stanley Lowther created this Life Tributes page to make it easy to share your memories.

Stan was born in Salem, Oregon, to Robert Franklin Lowther and...