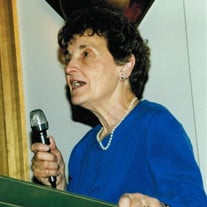 Irene Corrado Williams, 90, of Corvallis, Oregon, passed away Wednesday, December 19, 2018 at Conifer House in Corvallis surrounded with love by her son, her daughter-in-law and caregivers from Conifer House and Lumina Hospice and Palliative Care. Irene was born on March 4, 1928 in Youngstown, Ohio to Angelo Antonio Corrado and Angeline (Damore) Corrado. In 1951, she was graduated from Youngstown College, where she met her future husband, David C. Williams, while performing radio plays at the college radio station. They were married on June 14, 1952 and then moved to Dayton, Ohio, where David was a Brink’s Inc. manager. Irene was a high school teacher in the 1950s. In the late 1950s, Irene and David moved to New Jersey and lived in Essex Fells and Cranford before settling in Martinsville. Starting in the 1960s, Irene taught English, then Biology and Ecology at Union College. She loved teaching. She especially enjoyed taking her classes on field trips to the Bronx Zoo, Pine Barrens and Pennsylvania coal mines. Irene taught at Union College until moving with her family to Lebanon, New Hampshire in 1992. There, she was human resources director for several years for her family’s business, Audit Security Bags. After her husband passed away in 2002, Irene returned to teaching, serving as an instructor in Anatomy and Physiology at Lebanon College until 2013. Irene moved to Corvallis, Oregon in 2014. Irene enjoyed traveling, spending time with friends and family and hosting church and women’s clubs events. She was a past member of American Association of University Women (AAUW) and a past president of the Lebanon, New Hampshire Women’s Club. Irene and David were members of congregations of the Church of Jesus Christ in New Jersey, Massachusetts and Maine and Irene was a Sunday school teacher and choir director. When they moved to New Hampshire, they attended the Meriden Baptist Church. Irene, an accomplished pianist, enjoyed playing piano for church services. She was preceded in death by her husband David C. Williams, her daughter Dr. Cheryl Ann Williams, her sisters Amelia “Amy” Cook and Annette Corrado and her parents. Irene is survived by her son, D. Craig Williams, and his wife, Bernadette of Waldport, Oregon. No services will be held. Memorial gifts may be directed to Lumina Hospice and Palliative Care (Corvallis, Oregon) and to Union College (Cranford, New Jersey). McHenry Funeral Home in Corvallis, OR is handling arrangements.

Irene Corrado Williams, 90, of Corvallis, Oregon, passed away Wednesday, December 19, 2018 at Conifer House in Corvallis surrounded with love by her son, her daughter-in-law and caregivers from Conifer House and Lumina Hospice and Palliative... View Obituary & Service Information

The family of Irene Williams created this Life Tributes page to make it easy to share your memories.