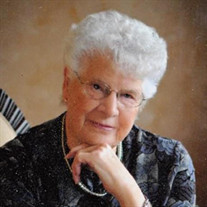 On November 15, 1921, at Fry Station, east of Albany, OR, David and Bena Roth Schrock welcomed their daughter Irene into the world. She was the second oldest of 6 children; brothers Vernon, Earl and Dale Schrock and sisters, Pearl Kotyo and Opal Kuhns, all of whom preceded her in death. Irene grew up on a farm in Tangent, OR. She learned how to care for livestock, harvest her own food, make delicious meals from scratch and sew her own clothing. Mom learned how to quilt from her Mother; a passion she passed on to her daughters. She especially enjoyed quilting with her, “Due-Knots” group, once a month, where she could include an occasional friend or relative. In 1939 she met her life-long love, Loren Herbert. They were married on August 21, 1940. Loren and Irene purchased a farm south of Corvallis in 1945. There they raised their 4 children whom were taught the value of hard work and respect for others. Nearing retirement, they purchased a second home in Yuma, AZ where they enjoyed spending winters. At the top of the list were date milk shakes, trips to Mexico, the surrounding area and the countless friends whom they met over the years. Loren, Irene and their family were longtime members of the Corvallis First Christian Church where they felt at home and enjoyed being part of that community. After Loren’s passing in 2007, Irene continued to live in the farm house until she wasn’t able. Her family was her world. She loved the many gatherings which almost always revolved around food. Irene’s German heritage was reflected in her cooking. Her recipes and ‘little tricks of the trade’ were passed to her children, grandchildren and some of her great grandchildren. Every year she would host a donut feed where family and friends made ‘spud nuts’ from scratch. Cider made fresh from the apples grown on the farm topped things off. Irene peacefully passed away December 16th, 2021 at the age of 100 years, 1 month and 1 day old. She is survived by daughters, Delores Oliver, Markie (Dale) Shields, Lorene (Bill) Smith and son Don (Connie) Herbert., 9 grandchildren, 25 great grandchildren and 1 great, great granddaughter, Everleigh; countless nieces, nephews, cousins and friends. She was preceded in death by..... well, when you live to be 100, there are too many to list. In lieu of flowers, contributions to Corvallis First Christian Church, 602 SW Madison Ave, Corvallis, OR 97333, attn: Due-Knots Quilting Group, will be appreciated. Thank you. A public viewing is planned for 2:00-4:00 PM, Tuesday, December 21, 2021 at McHenry Funeral Home. A private burial is planned for family. A public celebration of life is being planned for 2022. Please leave condolence messages for the family here on the website.

On November 15, 1921, at Fry Station, east of Albany, OR, David and Bena Roth Schrock welcomed their daughter Irene into the world. She was the second oldest of 6 children; brothers Vernon, Earl and Dale Schrock and sisters, Pearl Kotyo and... View Obituary & Service Information

The family of Irene Schrock Herbert created this Life Tributes page to make it easy to share your memories.