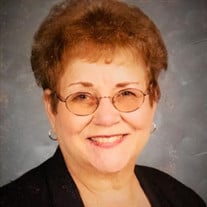 Gwendolyn Frances (Walls) Stevenson departed from this world on the evening of July 10, 2020 in Corvallis, Oregon. Gwen was born to Douglas and Marie Walls on November 16, 1940 in Millinocket, Maine, where she was raised and attended high school. Gwen attended Boston University for a year and graduated from the University of Maine in 1963. Following graduation, she moved to Juneau, Alaska where she met and married her husband, Tom Stevenson. They subsequently moved to New York City where Tom attended seminary to study for the priesthood in the Episcopal Church and Gwen taught high school in Manhasset, New York. Before leaving New York, their elder daughter, Laura, was born. This was followed to a move to Alaska, where Tom was ordained as a priest and Gwen taught school in Sitka. After two years in Sitka, the family moved to Huslia, a small village in the Alaska interior. While there, Gwen taught elementary school and her younger daughter, Andrea was born. In 1973, Gwen and her family moved to Ontario, Oregon. While there, Gwen taught senior English, drama, and journalism at the nearby Fruitland, Idaho School District. Gwen also coordinated trips to Europe and to the Shakespearean Festival in Southern Oregon for her students. In 1981, she won the Teacher of the Year Award for the State of Idaho. In 2002, she was granted Educator of the Year Award from the Fruitland, Idaho Chamber of Commerce. Gwen retired as a teacher with the Fruitland School District in 2003. After retirement, Gwen and her husband, Tom, moved to Alsea, Oregon in 2005. Gwen became an active member of the Good Samaritan Episcopal Church where she was also a member of the Daughters of the King. Gwen is survived by her husband, Tom Stevenson; her two daughters, Laura Compton and Andrea Baker; three grandchildren: Anthony Compton, David Compton, and Elizabeth Baker; great-granddaughter, Aria Compton; brothers Richard and Robert Walls, and sister Donna Carlstrom. McHenry Funeral Home is handling arrangements. A public viewing is planned for Wednesday, July 22 from 2:00-4:00 PM. A graveside service will be held at 1:00 PM on Thursday, July 23, 2020 at Alsea Cemetery.

Gwendolyn Frances (Walls) Stevenson departed from this world on the evening of July 10, 2020 in Corvallis, Oregon. Gwen was born to Douglas and Marie Walls on November 16, 1940 in Millinocket, Maine, where she was raised and attended... View Obituary & Service Information

The family of Gwen F Stevenson created this Life Tributes page to make it easy to share your memories.