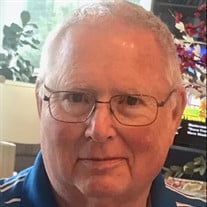 Gregory (Greg) L. Mimnaugh passed away on April 8, 2020 at the Good Samaritan Regional Medical Center in Corvallis, Oregon. He was 74. Greg was born May 2, 1945 to George and Lois (LaRoche) Mimnaugh in Portland, Oregon. He was raised in Portland where he attended school and graduated from Cleveland High School in 1963. Greg continued to live and work in Portland eventually moving into an apartment next door to Doris Hraba. Greg and Doris were married June 17, 1967 and moved to Corvallis for Greg to pursue an Engineering degree at Oregon State University. Corvallis became Greg and Doris’s home with Greg transitioning from Oregon State to a position at the American Can Company (now Georgia Pacific) and the beginning of a 34 year career with the company. During their nearly 53 years of marriage Greg and Doris raised two daughters: Amy Ann and Jill Suzanne. Greg was driven by his love for his family, his passion for Corvettes, his enjoyment of boats, fishing and landscaping. He was known for his ability to negotiate great deals – most commonly on Corvettes. It was easy to know when he was in the midst of a deal because he would say he was “sharpening his pencil” with a mischievous twinkle in his eye. Greg spent many summers with Doris and the girls on their boats in Newport. He was an avid fisherman and loved to share his knowledge and experience with others by including them in his countless fishing trips. Greg was the captain of a fishing boat who didn’t really like to eat fish. He was always happy to share his catch and did so for many years with an end-of-season salmon BBQ. Greg will be remembered by his children and grandchildren for the Christmases spent together with Greg as the family’s Santa Claus, the many trips up and down the driveway with Gramps on the tractor as he carefully manicured the yard, and the more exhilarating rides around town in his latest Corvette. Greg was preceded in death by his father and mother, and eldest sister Joan Mimnaugh Pierson. He is survived by wife Doris, daughters Amy Savage and Jill Larson, son-in-laws Brian Savage and Eric Larson, grandchildren Katie Savage and fiancé Cameron Hendricks, Nick Savage, Zola and Ella Larson and many loving extended family and friends. Due to the current isolation requirements, a celebration of life event will be held at a future date. Memorials may be made to Good Samaritan Hospital Foundation, 815 NW 9th Street, Corvallis, OR 97330. McHenry Funeral Home is handling arrangements. Please leave condolence messages for the family at www.mchenryfunerahome.com

Gregory (Greg) L. Mimnaugh passed away on April 8, 2020 at the Good Samaritan Regional Medical Center in Corvallis, Oregon. He was 74. Greg was born May 2, 1945 to George and Lois (LaRoche) Mimnaugh in Portland, Oregon. He was raised in Portland... View Obituary & Service Information

The family of Gregory L Mimnaugh created this Life Tributes page to make it easy to share your memories.