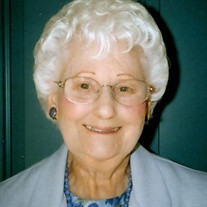 Grace Louise Riesland crossed over from death to life with her Lord on April 15, 2021. Her parents were Irene and Laurence Mahary of Boise, Idaho. Grace was born in Reith, Oregon where her parents spent 6 months after car problems delayed their journey to Southern California. Grace lived in Montebello, Ca. and graduated from Pasadena Nazarene academy in 1946. She received her A.A. Degree from East Los Angeles Jr. college in 1948. On July 16, 1948 she married Delbert Weigel and left home to reside in Albany, Oregon. In 1950 they moved to Spokane, Washington where Delbert was stationed in Fairchild Air Force base. After Delbert was discharged, they lived in So. California again until work transfers took them to Reno, Nevada and later to Corvallis, Oregon. Delbert passed away in 1982 at age 59 and Grace was 53. Delbert and Grace had 3 children: Nancy Jo of Pasadena, Ca.; Linda Joy of Monrovia, Ca, and Robert Alan of No. Ca. After Grace was single for 13 years, she married Benjamin Riesland on June 4, 1995. They traveled extensively to the following places: Israel, Egypt, Jordan, Hawaii, Alaska, Mexico, and Canada. After their U.S. trip with their R.V. they had both visited 50 states. Grace had years of piano instruction and then taught piano for 25 years. She played the piano and later the organ for 50 years at her church. Before building her piano class, she was employed by the Corvallis school district for 7 years. She was part of an Organ club group for 30 years. Her main love was her church, and she attended her whole life. She was involved in the following ways: Organist, Board member, Sunday School teacher, Missions President, Hospital visitation, and Flower Ministry. Grace was blessed to have had two husbands who loved the Lord and were good to her. Her children also love the Lord and have been a blessing to her. She had 5 Step-children who brought her joy: Darlene Potter, Dan Riesland and Joyce Clayton. Helen Tank and Janet Jones are deceased. Remembrances can be made to Healing Hearts Ministry. PO Box 2265, Corvallis OR 97339. The memorial service will be held at Suburban Christian Church in Corvallis at 1:00 PM Monday, April 19, 2021. A private graveside committal is planned for Tuesday, April 20. 2021 at Twin Oaks Memorial Gardens in Albany. Please leave condolence messages for the family here on the website.

Grace Louise Riesland crossed over from death to life with her Lord on April 15, 2021. Her parents were Irene and Laurence Mahary of Boise, Idaho. Grace was born in Reith, Oregon where her parents spent 6 months after car problems delayed... View Obituary & Service Information

The family of Grace Louise Riesland created this Life Tributes page to make it easy to share your memories.

Grace Louise Riesland crossed over from death to life with her...