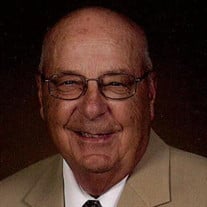 Gerald “Jerry” Allison of Corvallis, Oregon, passed away on August 5, 2020 at Good Samaritan Hospital in Corvallis surrounded by his family. Jerry was born in Scranton, Iowa to Guy Byron and Leota (McCullough) Allison, moving to the Eugene area when he was two. After graduating from University High School, he served four years in the United States Coast Guard as a radioman. He had some memorable experiences on rescue missions and a tour of the North Pole on the icebreaker Northwind. Receiving an honorable discharge from the Coast Guard, he enrolled at the Oregon Institute of Technology, where he studied electronic technical engineering. Jerry then went to work for Lawrence Livermore Labs and soon after, married Patricia (Schaefer) in Salem, OR. Jerry and Pat moved back to Livermore, where they began to raise their family. Family was always important to Jerry. In 1965, his father was killed in an industrial accident. Jerry and Pat moved back to Oregon to be closer to family members. In Oregon, Jerry was hired by the Chemistry department at Oregon State University where he had a long and fulfilling career running the electronics shop and maintaining large research equipment. He worked there for 28 years before retiring. Jerry was always creative; he designed and built new equipment for the Chemistry department and even had a couple of patents. In retirement, Jerry continued to be active and had many years of enjoyment with his family and friends, spending winters in Yuma, AZ with his wife Pat. Jerry had many interests and hobbies. He loved woodworking, fishing and golf. He liked camping and hiking with friends and family, and enjoyed travelling and exploring new places. Most of all, Jerry loved his family and was much loved in return. His two children and three grandchildren have many very fond memories of him. He especially loved being with his wife Pat, spending 61 years together. Jerry was preceded in death by his parents, three sisters and two brothers. He is survived by his wife Pat; son Greg Allison (Debbie); daughter Renee Narimatsu (Jon); and grandchildren Tessa, Jay and Katie. A graveside service will take place at 1:00 PM on Tuesday, August 11 at Zion Lutheran cemetery in Corvallis. A memorial service will be held at Zion Lutheran Church on Saturday, August 15 at 10:00 AM.

Gerald &#8220;Jerry&#8221; Allison of Corvallis, Oregon, passed away on August 5, 2020 at Good Samaritan Hospital in Corvallis surrounded by his family. Jerry was born in Scranton, Iowa to Guy Byron and Leota (McCullough) Allison, moving to... View Obituary & Service Information

The family of Gerald "Jerry" Lee Allison created this Life Tributes page to make it easy to share your memories.

Gerald “Jerry” Allison of Corvallis, Oregon, passed away on August...