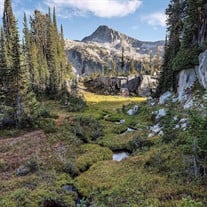 George Allen Swanson, 77, of Corvallis died July 18, 2021 after a battle with pulmonary fibrosis. He was preceded in death by his brother, Jim, his father James Leland, and his mother Blanche. George is survived by his brother Dale Swanson and family, his daughter Kimberli LeMay (Malcolm), granddaughter Ashley Calder, and his two step children Malory and Collin Peterson. George was born in Warrenton, Oregon and grew up in the Astoria/Warrenton area. He grew up learning to fish and clam and worked long, hard hours in the local mills during the summers. He was active in high school sports and was proud of his accomplishments as a high school football player. He attended Southern Oregon College and graduated with a Bachelor of Science degree with plans to become a teacher. He later earned graduate degrees from both Oregon State University and that other university south of Corvallis. George moved to Corvallis in 1967 where he taught primarily fifth grade in the Corvallis School District for over 30 years. He taught at Dixie, Hoover, Jefferson, and Wilson elementary schools. He was an innovative, caring, and creative teacher who enjoyed providing hands-on learning experiences for his students. Many of his former students love to share their stories about Mr. Swanson. George loved working and meeting people. After he retired as a fifth grade teacher, he joined the faculty at the OSU College of Forestry to help with recruiting kids from rural areas to study forestry. The College of Forestry recognized George’s good work in 2005 with an outstanding service award. He worked at OSU for over 12 years. George enjoyed playing softball and played on several local softball teams over the years. He loved the outdoors and was an avid fisherman, camper, biker, hiker and gardener. He also loved traveling in his camper to visit many parts of Oregon and the Pacific NW. As his friends and family can attest, George loved fishing and crabbing in the Pacific Ocean and Columbia River. His home is full of pictures of fish that he caught over the years off of the Oregon coast or in the Alaskan waters. George was a loyal and dedicated OSU alum and long-time fan with season tickets to football and basketball. He loved getting together with friends at tailgaters before the games and endured some rough football seasons as a lifelong beaver fan during the 1980s and 1990s. A celebration of George Swanson will be held at the Vinwood Taproom in Philomath, OR on Saturday, September 25, 2021 from 3 to 6pm. In lieu of flowers to honor George, contributions may be made in his name to the Samaritan Evergreen Hospice through the Albany General Hospital Foundation.

George Allen Swanson, 77, of Corvallis died July 18, 2021 after a battle with pulmonary fibrosis. He was preceded in death by his brother, Jim, his father James Leland, and his mother Blanche. George is survived by his brother Dale Swanson... View Obituary & Service Information

The family of George Allen Swanson created this Life Tributes page to make it easy to share your memories.