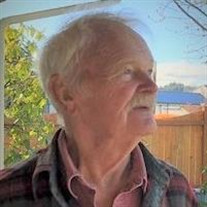 George Stephen Seits passed away at home on July 21, 2019, after a long illness. George, also called Geo, was born to Ancel Manford Seits and Eva Charlotte York on October 10, 1929, in Foster, Oregon. George was the fourth of eight children in a family of four boys and four girls. When he was a small child, his family moved to Alsea where he lived until after he retired from the woods in 1995. After George was finished with school, he went to work for his father as a whistle punk. Geo worked for several local logging companies and was a timber faller throughout most of his years in the woods. At the time he retired, he had worked for Hull-Oaks for over 20 years. Geo came from a musical family and played the harmonica and banjo. His banjo was a four string plectrum with a pearl neck and gold pickups. His mother, Eva, played the piano, and she and George played for dances at the grange hall. Geo enjoyed performing. He played well, sang, stomped his foot and whistled. George married Irene Steeprow in 1952. Irene was a widow with two children, Sandy and Kenny. Geo and Irene had three girls of their own, Georgene, Theresa, and Martine. After retirement, George moved to Logsden with his partner in life, Betty Evans. Geo loved fishing for steelhead and gardening and trading cool old stuff for other cool old stuff. George was a rather self-contained and independent individual. He wasn’t surrounded by a large number of friends, but he cherished and enjoyed his few long term friendships. George loved his sisters and his girls and Betty even more than he loved rice pudding, oatmeal raisin cookies and pancakes on Sunday morning. Betty happily indulged his enthusiasm for good food. She took good care of Geo throughout the years and especially during his illness. He rightfully credited her with adding years to his life. George could be funny and used words and expressions he must have heard from other funny old guys. His friends and family will continue to use some of his favorites. No hill for a high stepper – Hell for strong – Skookum – Doobisary – Whip-around – Bucker’s choice – Borrow to own – are just a few. At the end of his life, and as sick as he felt, his thoughts were not of himself. He asked to see friends and family and let us know he loved us. We will think of him and love him every day of the rest of our lives. Geo was preceded in death by his parents, Ancel and Eva, siblings Manford, Ancel, and Nova and by two of his children, Kenny and Martine. He is survived by his partner of 23 years, Betty, his sisters Mary, Beverley and Frances and daughters, Sandy, Georgene and Theresa and ten grandchildren. His memorial service will be held on Saturday, August 24 at 1:00 p.m. at the Alsea Grange Hall. His family will bring flowers from his back yard, so in lieu of flowers, donations can be made to the Alsea Grange Hall.

George Stephen Seits passed away at home on July 21, 2019, after a long illness. George, also called Geo, was born to Ancel Manford Seits and Eva Charlotte York on October 10, 1929, in Foster, Oregon. George was the fourth of eight children... View Obituary & Service Information

The family of George Stephen Seits created this Life Tributes page to make it easy to share your memories.