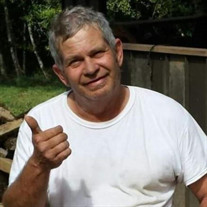 Gary Neil Smith passed away in his home on June 28, 2021 in Corvallis Oregon, he was 60 years young. Gary was born in Riverside California, June 8, 1961 and moved to Oregon at age 2 with his family on Starr Creek Rd. He lived there until his 20's when he moved out on his own for a short time until buying the property from his parents in 1993. Gary's dad would take him to work with him when he was about 5 to teach him how to become a roofer and so Gary became known as the best roofer in the valley for the last 55 years. He was married and divorced at a young age and had 2 boys Kenny and Kyle whom he loved very much and they did everything together like, hunting, fishing, camping, cutting firewood, riding 4 wheelers and just being together. Gary met Sarah in 2003 and then they did everything together on the homestead including building his dream shop and green house, gardening, hunting, fishing, crabbing, working the blueberries (haha), planting flowers, and loved hosting wild parties and making memories with all his good friends and family whom he loved with all his heart. Gary and Sarah finally got married June 9,2015 in Corvallis, Oregon and got his little sidekick (Terrier) Rosco in 2017 and they became inseparable even when he was sick Rosco was by his side. Gary became a "papa" on June 26,2019 to his only granddaughter Rayleecia Smith who stole his heart the minute he held her on day one. Even though Gary found out he had cancer in October of 2015 he went to work every day up until he had to retire in 2018 but always made sure he was out in his garden, driving his tractor, working around his home or just doing something to stay busy because he was always determined to keep going and fight his cancer until his last breath. Gary is preceded in death by his parents, Margaret Ann Falardeau Smith, Alexander Garfield Smith, his brothers Thomas (Tommy) Edwin Smith, and Robert (Bob) Edward Smith, his sister Dortha (Dinky) Belle Smith, and his son Kyle Taylor Smith Gary is survived by his son Kenneth(Kenny) Dwayne Smith of Philomath, granddaughter Rayleecia Kelly Smith of Colorado, sisters Charlotte Ann Smith Powell of California, and Lottie Maurene Smith Koontz (Don) of Monroe, brothers Alvin Garfield Smith (Virginia) of California, Jerald Wayne Smith(Belita)of Eugene, Melvin Lee Smith of Corvallis, Benny Jay Smith (Lori) of Corvallis, Abraham Luke Smith (Jessica) of Eugene, Jaron Scott Smith of Missouri and his one and only, ride or die, bestfriend, lover, partner, wife Sarah Ilean Tabor Smith of Corvallis who was always by his side till his last breath. If you would like to donate anything to help out Sarah during this difficult time you can contact her to set up arrangements. There will be a celebration of life for Gary on August 21,2021 at 3pm at the Koontz Park located at 29122 E. Ingram Island Rd, Monroe Oregon 97456 There will be a potluck so feel free to bring a side dish of your choice, the main course will be provided. Please come and help us celebrate Gary's life and share memories.

Gary Neil Smith passed away in his home on June 28, 2021 in Corvallis Oregon, he was 60 years young. Gary was born in Riverside California, June 8, 1961 and moved to Oregon at age 2 with his family on Starr Creek Rd. He lived there until his... View Obituary & Service Information

The family of Gary Neil Smith created this Life Tributes page to make it easy to share your memories.