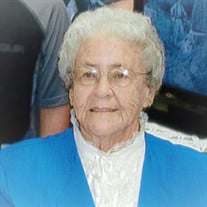 Eunice M. May Davis passed away November 22, 2018. Born to Charles L. and Susie Hollingsworth May on December 27, 1923 in Alpine, Oregon. She joined four brothers, Roy, Joe, Sam, and Louis; sisters Florence and RuthAnn May. Eunice graduated from Philomath High School in 1942 that's where she met her future husband Don Davis. After a 5 year courtship, they were married August 26, 1943. They were blessed with three wonderful daughters and a wonderful son. They were so proud of their family. Don and Eunice built their first home in Blodgett and lived there for 12 years. Their second home was in Alsea for 7 years then bought a 32-acre farm near Philomath where they lived for 42 years. In 2004 they moved to Corvallis. Don and Eunice spent about 15 years of their retirement traveling in their motor home. When the children were still home they did a lot of camping and fishing. Eunice was a stay-at-home mom and housewife for 19 years. In 1965, she went to work for OSU Food Service for 25 years. She retired in 1991. Eunice loved her job. Eunice was proceeded in death by her parents, six siblings, on great grandson, and beloved husband Donald A. Davis who died on August 8, 2016. They were 18 days short of their 73rd anniversary. She is survived by daughters Karen Neisess, Connie and husband Jerry Bennett, and RuthAnn Drake all of Philomath; and son Donald R. and wife Billie of Alsea; 9 grandchildren; 17 great grandchildren; and 7 great great grandchildren. A Graveside Service will be at 2pm on Friday, December 7th at Twin Oaks Memorial Gardens in Albany, Oregon. A visitation will be held from 10am-12pm on December 7th at McHenry Funeral Home. A gathering of family and friends will be held at the First Baptist Church, 335 S. 26th Street Philomath, OR from 3pm-5pm following the Graveside on December 7th. In lieu of flowers, if inclined, please donate to the Soup Kitchen, PO Box 670 Philomath, OR 97370.

The family of Eunice Davis created this Life Tributes page to make it easy to share your memories.