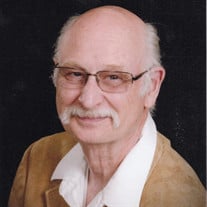 EUGENE "GENE" KEITH ABRAHAM Gene was born in Albany on Easter Sunday, April 9, 1944, to Howard Lester and Ellen Davidson Hense Abraham. He passed to his Savior on election day, November 3, 2020, at GSRMC, Corvallis. He grew up on the family farm in Halsey, helping with chores, which could include milking cows, tending sheep or an occasional hog, and gathering, sanding and candling eggs from up to 5,000 hens and chickens. Gene was a 4-H member for over 10 years and was a multiple Grand Champion poultry showmanship trophy winner at the Linn County fairs. He also took blue ribbons in the senior poultry showmanship contests and won top State honors one year with his poultry entry. Eugene enjoyed playing baseball and softball. He, like his parents, joined the Oakville Western Star Grange at a young age; he entertained the members with his accordion on several occasions. Gene participated in events at Central Linn High School from which he graduated. Gene enlisted in the U.S. Air Force after graduation and served as a Weapons Specialist in Viet Nam. He was also one of a detail sent to South Korea after the taking of the USS Pueblo. He was honorably discharged with the rank of Sergeant in 1968. He served in the Reserves until March 1971. Gene considered it an honor to serve his Country. He was hired by American Can Company in Halsey in 1969 and worked there during the years that it was also named Fort James, James River, and Georgia-Pacific. He retired ca. 2007 as a journeyman electrician. Gene was blessed with his son Adam from a previous marriage. He was the last of the original 1973 HOA Adair Meadows (later named Adair Village) residents still living in Adair. Before his death, Eugene was one of two remaining true founders of Adair's Fire Protection District and volunteer fire department. He was elected to the Board of Directors for nine years and served as Chairman for eight of those years. He also was an Adair volunteer firefighter for 25 years until he retired in 1999. Newspaper accounts show that meetings for the Adair Fire District started in mid-1973. Dennis Haney, an early proponent, strongly advocated for and worked for its formation. Gene attended meetings, ran for office, and was one of five board directors elected on January 15, 1974. The county's formation committee selected Haney as Fire Chief. Adair's Fire Protection District was founded! Fire Chief Haney sought volunteer firefighters and the directors gave a report on what had been accomplished and what was being planned during their March 13, 1974 meeting. Volunteers from that meeting forward continue to grow the department to the benefit of all who live in the district. When drawing lots for terms in January, Gene drew the "short term"; he was re-elected, unopposed, May 7, 1974. One Sunday he answered a fire alarm when returning home from church. At that year's annual dinner, he was awarded a tie and a certificate proclaiming him "Best Dressed for Emergency Responses", as he had responded in a tie and three-piece suit. Gene enjoyed hunting and he especially enjoyed fishing. He loved to travel and to volunteer at his church. He met his present wife during a tour of Egypt and Israel. His most exotic trip was to India to see his beautiful newborn granddaughter Avani. Hoping that people would understand that no matter how they felt about Jesus, that Jesus still loved them unconditionally, he put the statement "JESUS LOVES YOU" on the bug guard of his 1974 red Ford pickup. The declaration stayed there until it was transferred to the guard of his 2002 red Ford pickup. He faithfully participated in all of Adair Village's July 4th city parades, making sure that veterans were remembered and honored. He was surprised and pleased to learn that he was a direct descendent, through his mother's maternal line, of Mayflower ancestor Richard Warren. Gene was predeceased by his parents, brother-in-law Dean Dark, sister-in-law and her husband Ruth and Peter Maaske, and his beloved sister and her husband Kae and Glen Means. He is survived by Faye his wife of 21+ years, who is so thankful that she met and married him. She will greatly, significantly, eminently miss him, as well as his occasional slow dancing, even in church, up to where she would be standing, waiting for him. Survivors include his son Adam (Sejal Desai) Abraham; brother Howard Lee (Anna Nadine); stepsons Clint (Terri) and Dustin; grandchildren Avani, Lauren (Alexander), Mary Margaret, James (Kaylynn), Angel (Andre), Jade, and Kailynn; four great-grandchildren; brother-in-law Hubert; sister-in-law Carol; nieces and nephews; and also-claimed grandchildren Dylan and Sarah and stepdaughter Danielle and her children. A special thank you to Dustin, Keith Timm, and the Signature Home Health caregivers who dedicated time and energy to Gene's welfare during his last weeks. A military graveside service with honors was held November 16, 2020, at Willamette National Cemetery, Portland, Pastor Frank Clore officiating. A Celebration of Life for Eugene K. Abraham will be held Saturday April 10, 2021, 2:00 p.m. at Kings Circle Church, Corvallis, Pastor Bill Lagerquist officiating. In lieu of flowers, contributions in memory of Eugene, who loved his Lord, may be made to the House of Grace, 1209 6th St., Tillamook 97141, c/o Peggy Walstead; the Salvation Army; the Union Gospel Mission of Salem; or other such Christian-based non-profits. McHenry Funeral Home helped with arrangements.

EUGENE "GENE" KEITH ABRAHAM Gene was born in Albany on Easter Sunday, April 9, 1944, to Howard Lester and Ellen Davidson Hense Abraham. He passed to his Savior on election day, November 3, 2020, at GSRMC, Corvallis. He grew up on the family... View Obituary & Service Information

The family of Eugene Keith Abraham created this Life Tributes page to make it easy to share your memories.

Gene was born in Albany on Easter...