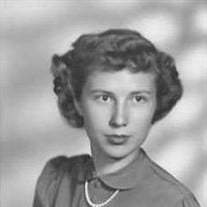 Ethel Gaye Henderson of Corvallis, Oregon was born on May 3rd, 1933 in Junction, Texas to Ed and Ila Jackson (Allen). She passed on September 5th 2019 in Albany, Oregon. Mom describes a mostly happy, but somewhat hardscrabble existence in Texas. Around 1940 much of her mother’s family decided to strike out to the land of opportunity-California. After a short time of doing field work, many of them were employed in the booming citrus industry. Mom’s parents settled in Home Gardens, an area next to Corona, California. They had a wonderful ranchette on the edge of town with cow, chickens and rabbits and fruit trees like you’ve never seen. Ethel attended high school in Corona, and was a cheerleader and a fast pitch softball pitcher. It’s hard for us to reconcile this image with the timid and self effacing person we knew her to be later on! Mom met our father Ron at Corona High school and they more or less eloped to Las Vegas in 1950. After bearing Ron, Mike, Mark and Tresa in rapid succession our parents decided to improve their quality of life, so we moved to Creswell, Oregon to a small farm. A few years later, brother Robert was born to complete the family of 7. As was the custom, she was a stay at home mom with a very full plate. Riding herd on children, gardening and canning and helping with the families hay business left precious little spare time. But she was able to indulge her artistic side with oil and tole painting, antique restoring and other art projects. Mom had the gift of an artists eye, something she sadly did not pass on! A mid life divorce did set her back for a time, but she still had the last 2 children at home to raise and so she persevered. Later, she moved to Corvallis for the last 20 of her years. Mom was now fully able to unleash her inner artist and produced so many beautiful objects. She had the most wonderful neighbors on Alexander St in south Corvallis and we want to thank those who were so kind to her there, especially Mark. Ethel is survived by her 5 children, 10 grandchildren, numerous great- grandchildren and several cousins. Per Moms wishes, we will not have a service. She opted for cremation and herashes will go to a place that she loved in life. A special thank you to the folks at the Evergreen Hospice house in Albany, Oregon. You were so kind and so helpful in the last days and you won’t soon be forgotten. McHenry Funeral Home is handling arrangements.

Ethel Gaye Henderson of Corvallis, Oregon was born on May 3rd, 1933 in Junction, Texas to Ed and Ila Jackson (Allen). She passed on September 5th 2019 in Albany, Oregon. Mom describes a mostly happy, but somewhat hardscrabble existence in Texas.... View Obituary & Service Information

The family of Ethel Gaye Henderson created this Life Tributes page to make it easy to share your memories.

Ethel Gaye Henderson of Corvallis, Oregon was born on May 3rd,...