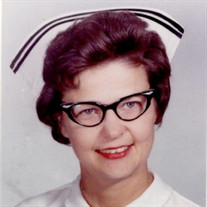 Enid Rose Mundhenke Berne Fulsang July 5, 1924 - October 20, 2019 Enid, 95, of Philomath, passed away on Sunday, October 20, 2019 at home. Enid was born July 5, 1924 at home outside Milford, Nebraska and lived on the farm until she entered nurses’ training at St. Elizabeth School of Nursing in Lincoln, Nebraska to become a registered nurse. She was the only sibling of 13 who went to college. She married Richard (Dick) Berne from New York City on the day of her graduation in 1945. He was a captain in the armed forces and had graduated from New York University. They lived in Newark, NJ, Lincoln, NE, Denver, CO and Palatine, IL before settling in Albany, Oregon, when Dick retired. Enid continued to work as a nurse at Albany General Hospital and then at North Albany Junior High (she was a school nurse most of her career). Her 37 years of nursing were very satisfying for her. She also loved having her children Nancy (Portland, OR), Richard Peter (Pine, CO) and Sally (daughter-in-law), Anne (preceded her in death) as well as being mom to all of the neighbors’ and friends’ kids. She is still well-known by Albany parents and teachers. In 1991, Dick passed away and Enid found herself to be very lonely. In 1993, she married Ejner J Fulsang, Jr and they enjoyed five years of companionship. After Ejner’s death in 1998, Enid shared her twilight years with Frank Halm of Corvallis. Enid has five grandchildren: Allison and Kane (grandson-in-law) Thomas, Courtney Berne, Ashton, Ryeson, and Seaton Berne and two great-grandchildren: Carsten and Audrey Rose Thomas. In addition, she has step-children: Ejner III and Julie (step daughter-in-law) Fulsang, Eleanor (formerly Fulsang) and Hank (step-son-in-law) Fields, Eric Fulsang and Aneida (step daughter-in-law), Elise Fulsang, and step grandchildren. Enid’s many other joys included gardening which benefited her church, her friends and even her hair dresser with weekly bouquets (her hairdo and lipstick were very important even as she spent her later days in the garden). Enid’s faith in God and support of family and many friends made her life a good one. A graveside service will be held November 2, 2019 in Milford, NE, and a memorial service 11:00 am on Saturday, November 16th at 1st Presbyterian Church in Corvallis, OR. In lieu of flowers, please consider a donation to Meals on Wheels (which Enid distributed as well as received) or 1st Presbyterian Church of Corvallis. McHenry Funeral Home in Corvallis assisted with arrangements.

The family of Enid Rose Mundhenke Berne Fulsang created this Life Tributes page to make it easy to share your memories.