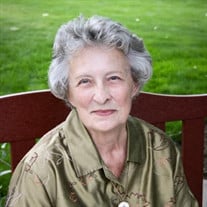 The Bluebird Lady Elsie Kollin Eltzroth, 95, died Friday February 1st in her home surrounded by her children. She was the youngest of four children of Rudolf & Valentina Kollin who emigrated from Bohemia. Her father was a master plumber in... View Obituary & Service Information

The family of Elsie Kollin Eltzroth created this Life Tributes page to make it easy to share your memories.