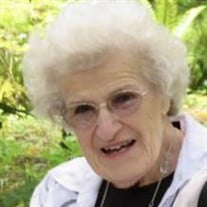 On April 29, 2020, Elizabeth Lucille (Betty) Johnson, a devout wife, mother, and advocate, died at home, husband and son at her side. Betty was born July 22, 1922, in Kansas City, Missouri to William and Mabelle Welsh. She entered college at age 17, graduating from the University of Arkansas, just after the US entered WWII. During the war, Betty worked in personnel at a Pratt Whitney manufacturing plant, the first woman not in the secretarial pool. After the war, she volunteered for the Red Cross in Korea. For a year, under spartan conditions, she organized social events for the troops, learning a few dance steps on the side. When she returned, she became Regional Director of the Girl Scouts for Kansas City, where one of her major initiatives over her decade there was to integrate the largely segregated organization. In 1952, mutual friends Bill and Lu Knapp set her up on a blind date. That date, with Francis Johnson, was the greatest turning point in her life. They were great dancing partners, and less than a year after meeting, they married, and stayed in love for 67 years. Betty gave birth to four children. As the oldest reached their teens, Betty and Francis decided they wanted to move to a smaller town. Francis had always wanted a hardware store. He found one for sale in Corvallis, Oregon and in December 1970 they moved. In Corvallis, Betty found her next calling at the Area Agency on Aging, setting up the area’s first Dial-a-Bus and Meals-on-Wheels programs, senior centers, and hospice services. She retired in 1987, but she wasn’t through. A big believer in community and volunteering, she found like-minded people and formed Volunteer Interfaith Caregivers of Corvallis, which she managed for years to come. Devout Catholics, Betty and Francis found a friend and spiritual mentor in Father Charles Harris. With him and others, they created Christian Village, a community built on shared Christian values, now called of People of Praise. In 1977, the group bought land southwest of Corvallis and built homes there, the Johnson home being one of the first. Several families lived with Betty and Francis while their homes were going up, forming lifelong bonds, dubbing their home The Johnson Hotel. The People of Praise family have been at the core of their life ever since. Betty and Francis lived in their home until 2017. After downsizing, support from People of Praise enabled them to live in an apartment, providing meals, errands, and companionship. Betty became an advocate on healthcare issues. As an advisor on legislative committees and governor’s commissions, she highlighted issues seniors face in maintaining health and independence. She and Francis saw the need for an affordable assisted living facility and started the non-profit Corvallis Caring Place. As part of Mid-Valley Healthcare Advocates and Oregon Healthcare for All, she championed universal healthcare at the state and national level. Betty is survived by her husband Francis, and sons David (Cathy), Mark (Heather Walek), and Russ (Maribeth Harris), and daughter Mary Elizabeth Welch (Gary). They have ten grandchildren, having lost one, Lara, far too young. Their sixteen great grandchildren include Surbhi, adopted in India late last year. Betty especially enjoyed sharing The Johnson Hotel with many of their children and grandchildren. She loved to play games - dominoes, Uno, Tripoley – mostly for the laughs. She also loved to see new places and marvel at the beauty of creation. The entire family is deeply grateful for the support from the People of Praise community and their caregiver Nicole, especially over the past year. A private family funeral will be held this week. A memorial will be held at a later date. In lieu of flowers, the family suggests donations to Lumina Hospice, Mid-Valley Healthcare Advocates, or a charity of your choosing.

On April 29, 2020, Elizabeth Lucille (Betty) Johnson, a devout wife, mother, and advocate, died at home, husband and son at her side. Betty was born July 22, 1922, in Kansas City, Missouri to William and Mabelle Welsh. She entered college at... View Obituary & Service Information

The family of Elizabeth "Betty" Johnson created this Life Tributes page to make it easy to share your memories.